In my last post, I shared the inspiration for this hat. Though, I didn't copy an original, I do hope I achieved the spirit of an early 20s hat! Once again, I was inspired by Jen Thompson's hat reshaping. 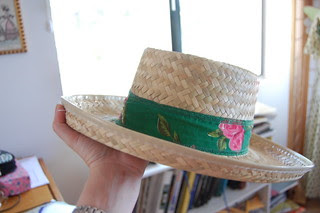 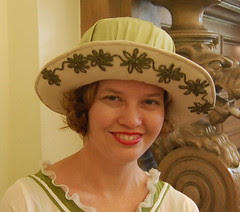 The hat is a rather plain straw hat from Party City. Just $4.95! Not bad at all for a hat blank. I chose it for the color straw and didn't even realized the band was my favorite pink and green combination until I got home.

I covered it in silk taffeta that I had bought for the underdress of the dress I'm wearing it with, leftover raw silk from an 1870s parasol I recovered and soutache from Farmhouse Fabrics. 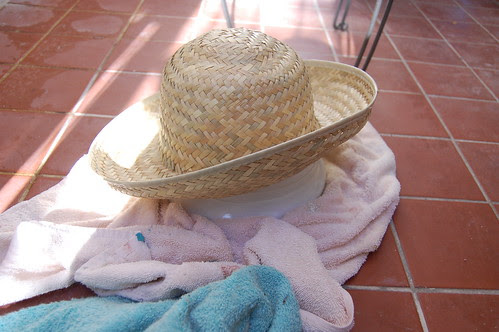 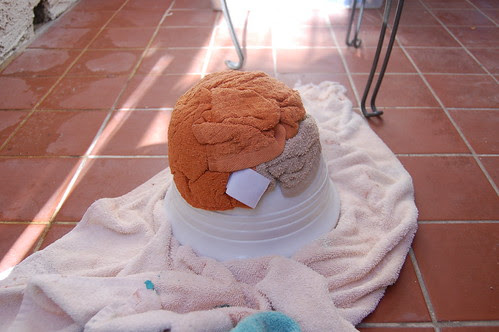 The first step was to completely wet the hat and find an appropriate bowl to stretch it over. I didn't have one with a suitably round base (I suppose bowls do need to sit...) so I took some wet dishtowels, stuffed them in the top of the hat until it was round, and then put the hat on my largest mixing bowl.

I then played with the shape of the brim until it curved up in front. 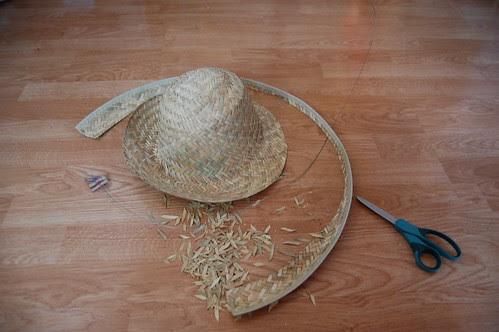 I let it dry, which took, oh, 20 minutes because it was 109 degrees out, and then trimmed the brim. While slightly scary, just remember--$4.95 hat blank, and maybe 15 minutes of time (not including drying) so far. Also, observe the cat toy :)

There's no real logic to shaping the hat or trimming the brim. You just have to do what you think looks good! 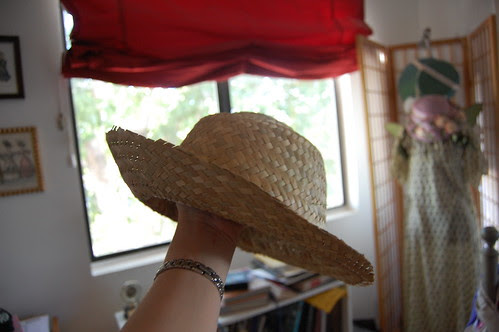 The trimmed hat. It's a little closer to my desired shape than my finished hat. The loose weave straw spread pretty easily. To avoid this in the future, I would sew a tight strip of fabric on the bias to hold it in place. 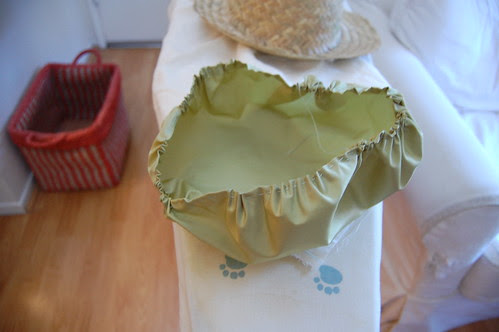 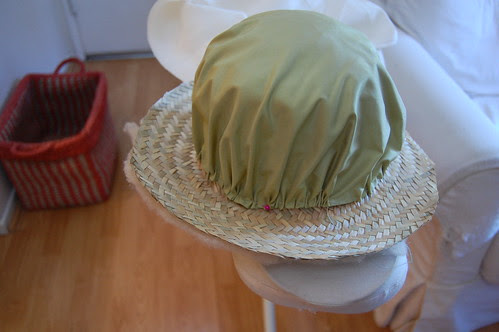 To cover the crown I just cut a circle of taffeta and gathered the edge. This look is fairly common in the early 20s. I thought, oh, this is loose, I don't need to line it. Wrong! Silly me, the straw shows through. By the time I realized this though, I would've had to take the whole hat apart. Not worth it!

You can see though, that I did plan for it to be quite loose. As the layers were sewn on, it tightened up a bit. 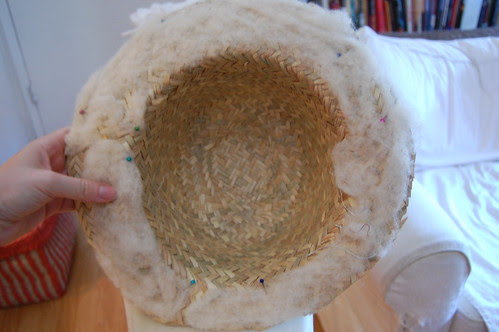 Next, I padded the brim with wool batting so straw wouldn't show through. I was very worried about this here! 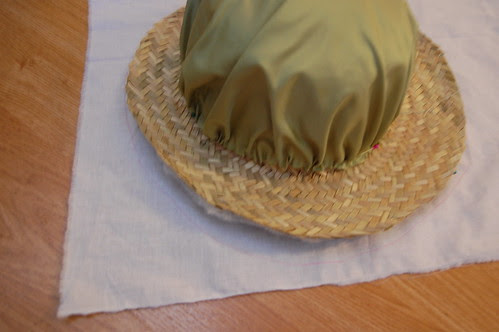 Then, I cut the lining for the brim. I set the hat down and traced a circle. 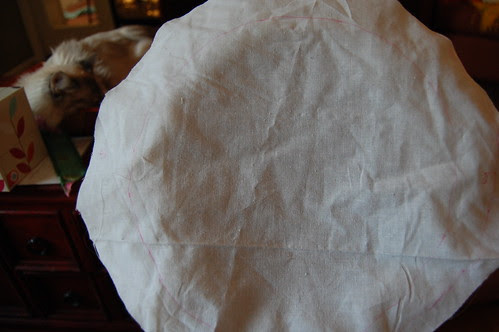 Placed the circle on the brim. 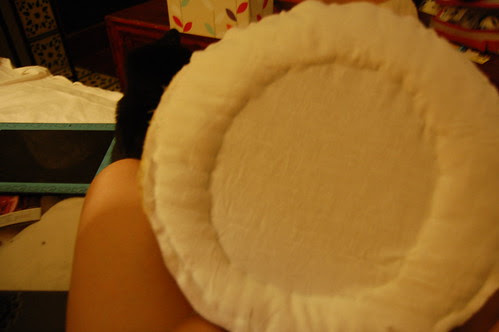 Sewed the circle to the outer and inner edges. 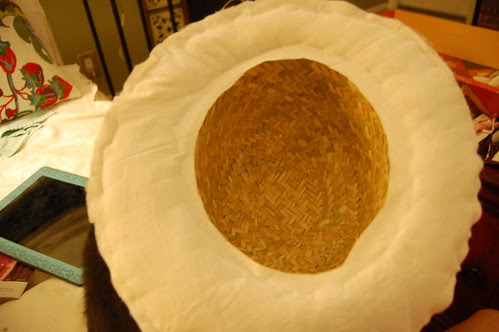 And cut the center out. So easy this way. Any irregularities in the hat don't make a difference. 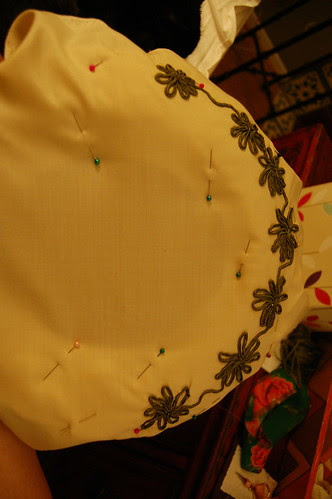 I repeated the process with the silk. The only difference was I marked the inside edge on my circle and sewed the soutache trim on before applying it. 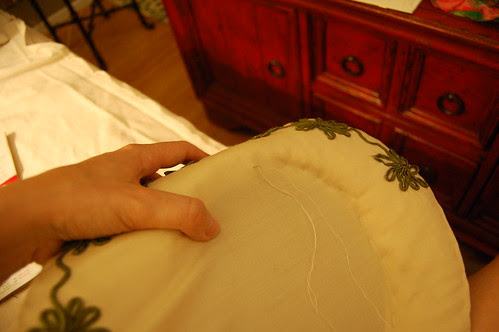 Sewing the silk on... 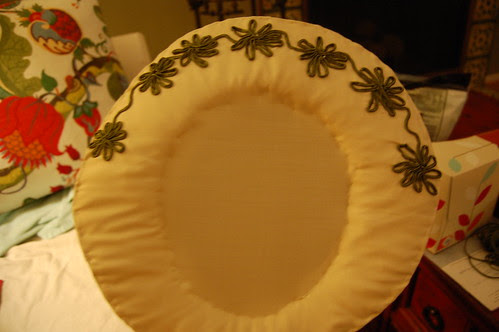 The silk sewn on, waiting to be cut.

When you cut the silk, cut about 3/4 an inch away from the sewing line, then clip into this seam allowance, just like you would a curved seam. 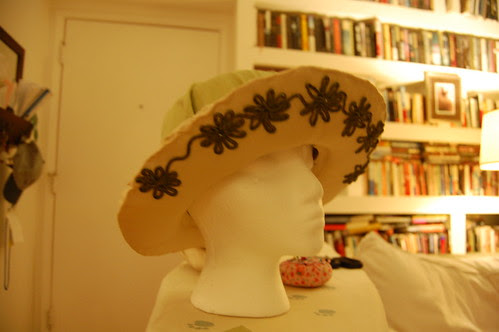 After the silk is cut.


Posted by Katherine Caron-Greig at 11:37 AM