I've been putting off posting pictures since I don't have very good pictures, but since I won't have a chance to take better pictures until Costume College if plans don't change, I thought I may as well!

Before I wear it again, I'm going to make it into a day version--detatchable long sleeves and a big collar cape thing--and put new buttons on my petticoats so they'll sit lower on my waist. The corset I wear with this dress is properly long waisted, but I didn't take into consideration that my petticoats would still sit at my natural waist. Oops. I did get a little length wrinkling because of that. There was also a little bias wrinkling that I may or may not deal with (I really wish I had cut this on the straight--I know many bodices were cut on the bias, which is why I did it, but this wouldn't have been an issue). It was barely noticeable in person, but in some pictures? It was rather, um, frightening. In spite of that (and quickly falling out hair), I don't think I've ever felt quite so pretty in a dress! This one was just so delicate and simple. Unfortunately, balls just aren't the best place for pictures--it's dark when you go, and you're so busy once you're there!

So enough of that, pictures, right? 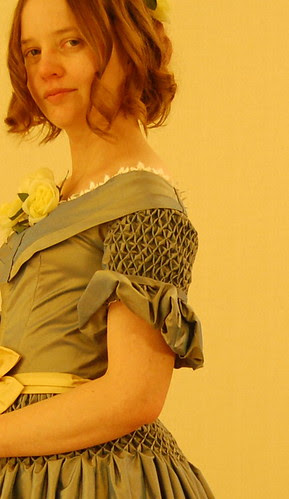 I just love the sleeves (I normally don't like to gush about my own work, but I can't help it with these sleeves!). Instead of doing pleating like my inspiration dress, I just let the smocking loose and sewed the base to the lining (which is peeking out in this picture). Then I sewed a band around. I got the idea from the pleats on this dress.

I used this excellent honeycomb smocking tutorial. I found that the smocking wasn't deep enough with a half inch square dot grid though. On the skirt, I put the horizontal dots one inch apart, and on the sleeves, I put them three-quarters of an inch apart. The vertical distance was still half an inch. Basically, I drew my grid as rectangles instead of squares. 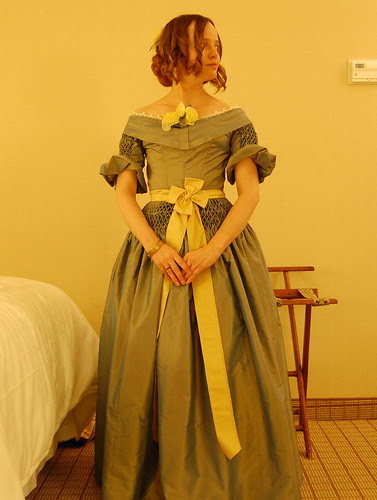 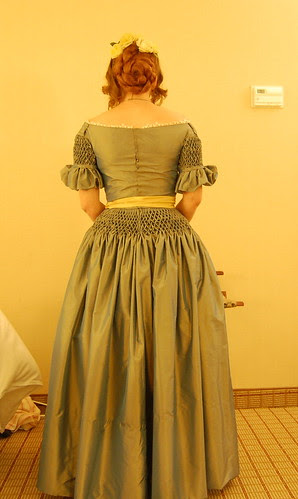 I'm wearing it over my underhoop petticoat, corded petticoat, and a plain petticoat, my Regency chemise and Past Patterns 1840-1880 corset. The corset does open in front with the style busk that was patented in the 1850s, but apparently there was one front opening busk patented earlier, even if it didn't catch on. That, and mentioning the 1830s fashion plate that shows this style is all the documentation I'll give for that (if I were less lazy, I'd try to find where I read about the busk and a copy of the fashion plate, but I'm lucky I'm just posting!). I did think about my 1820s corset, since that style was still in use in the 40s, but with the straps and very little support, I just didn't see it working under this dress! 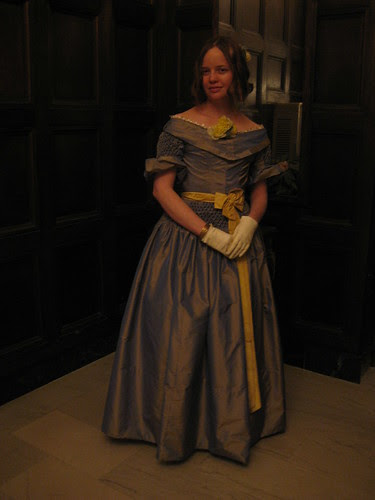 And a picture at the ball--a much better angle than the ironing board as tripod angle :)
Posted by Katherine Caron-Greig at 6:42 PM 26 comments: