I originally posted this on 16 July 2009. I think proportion is so important in costuming that I think it's an interesting post to look back on!

And I don't own these pictures, they're from two absolutely fabulous books that you should have if you have any interest in the 1920s, Lanvin by Dean Merceron and the probably hard to find Les Annees Folles by the Musee Galliera. I'm using them here merely as a teaching tool, as they provide a wonderful example!

I loved having two originals to go by on my copy of my robe de style. I've always been a fan of changing things so the proportions fit you, but having two dresses made it really clear. 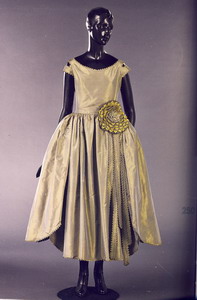 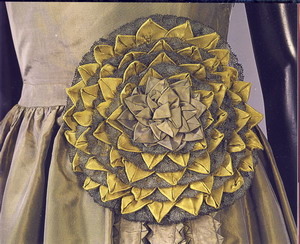 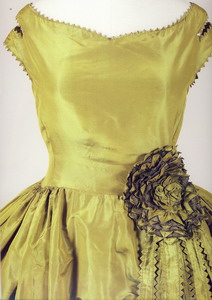 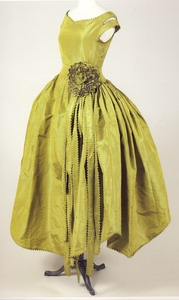 There they are! I wanted them smallish so they'd all fit nicely :)

The dresses have subtle differences, though very obviously the same design. Of course they do! They were made for different clients. Or, maybe one was a prototype. Or both. Whatever the reason, there are differences.

I'll number the differences, to make it easy on myself. Randomly assigned numbers of no real importance :)

Difference one. The waist. The blue/yellow dress has a waistband, the green dress does not. That's the obvious part. When you look closely, you'll notice that the blue dress is also higher waisted, and I don't think it's just a function of the mannequins. The waistband is level all around, and the green dress dips a tiny bit in front and quite a bit on the sides.

On my dress, I decided I liked the no waistband look, but dropping the hips? It wouldn't work. I have too much hip for that. So to keep the illusion of a dropped waist, I dropped the front more and raised the sides. I had to raise the back a little higher because without that, the whole bodice pushed up and looked very frumpy. Not good.

Difference two. Neckline shape. They're pretty different actually. The blue/yellow dress is much scoopier. The green dress is sort of a sweetheart neckline.

I went with the scoopier neckline on mine. Why? Well, to be honest, that's what it looked like when I got it to fit, I liked it and didn't feel like messing with it more. Also, it seemed to go well with my shoulders.

Difference three. The skirts. The gathering is quite different. The blue/yellow is fairly gathered across the front, the green is fairly flat. Maybe it's for the same reason the blue/yellow has the higher waist? Flat fronts aren't flattering on everyone. I really wish I knew the measurements of these dresses--the blue/yellow might just be for a thinner woman.

On my dress, I went with the more gathered look. I just liked it. Also, I decided my skirt width by the hem. I wanted it full enough to look good over the pocket hoops. And when the hem was full enough, the waist was more gathered. Mine is a little fuller around the waist than the blue dress, but there's a pretty good chance I'm smaller than it. Most time periods, hems are more important than waists when it comes to measuring. You can always squish more pleats or gathers or whatever into the waist, but if your skirt isn't full enough, it looks bad :)

Difference four. Shape. I really think this might be the way they're displayed though. The green is more fitted through the waist, the blue/yellow is straighter. My modern eye finds the tighter fit more flattering, but the looser fit looks more accurate, so I went with it. I really wish I could've found a picture of a woman in this dress, but saw quite a few of similar Lanvin dresses and they fit closer to the look of the blue/yellow. So, maybe it is the display, or it is c. 1920, maybe the green one belonged to a woman not quite ready to give up her waist yet.

For my dress, I did the straighter look. Tempting as it was to make it tighter :)

Difference five--Rosettes. The blue/yellow has lace on the outside, which I think gives the whole thing a flatter, larger look. Interesting that there are two colors also. The yellow is probably pretty close to the yellow part of the shot silk, but that's just a guess.

For mine, I made a slightly smaller version of the green. Proportionately better on me!

I think those are all my thoughts. They seem like a lot! Anyway, I think proportion is just about the most important thing in a dress, and this one was so interesting--to me at least--because of it!
Posted by Katherine Caron-Greig at 4:46 PM