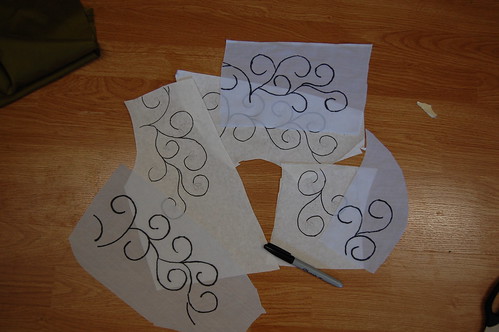 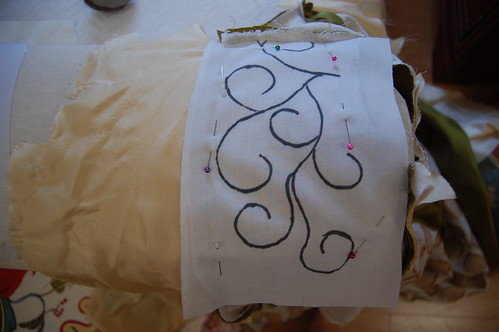 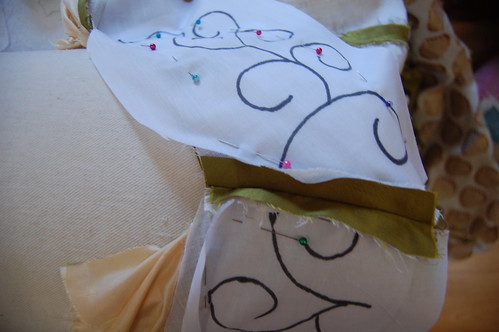 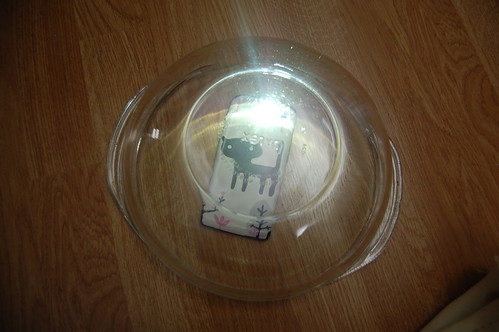 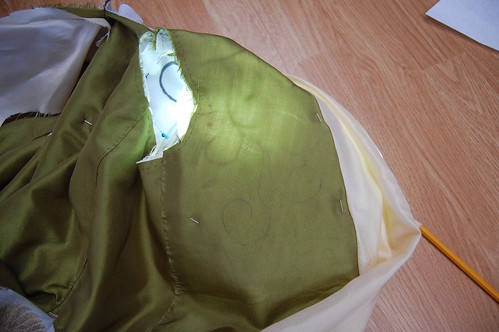 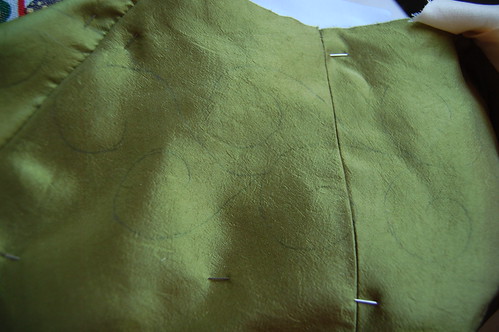 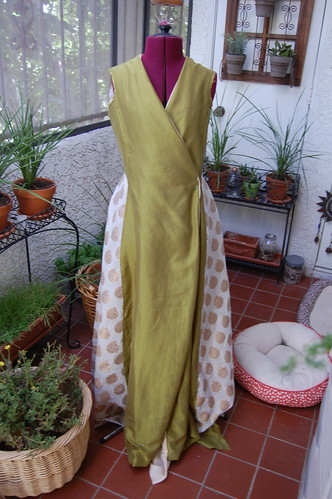 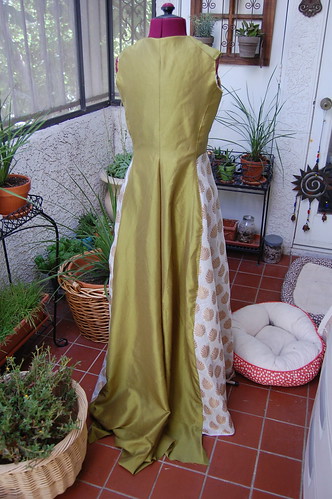 The completed dress can now be seen here!

The Game of Thrones, King's Landing inspired dress has been started! If it looks a little familiar, this is because it's the full version of my Game of Thrones sundress. It's made of green washed silk taffeta, plain weave gold silk, and cotton/silk brocade from Pure Silks. The bodice is lined in the 3.5 oz linen from Dharma Trading. I'm sewing it by hand--they don't have sewing machines in Westeros, do they? :) --using mainly 18th century techniques. When I've finished the dress, I'll write a post detailing my decisions, such as why I decided to hand sew, washing the silk taffeta, etc., but for now, I'm concentrating on construction.

The dress is made of four shoulder to floor panels of silk taffeta, two underarm pieces, and two insets/gores of cotton silk brocade. The bodice is flatlined with linen, which ends around hip level. The dress will be nearly fully lined--everything except the side gores--in the plain weave yellow silk. This lining is why I'm using 18th century techniques. I want all the seams covered, but I want the lining to be attached at all seams instead of hanging free like a bag lining. I'm going to share my pattern as well. Although it is sized to fit me, I hope that the shapes will be helpful. 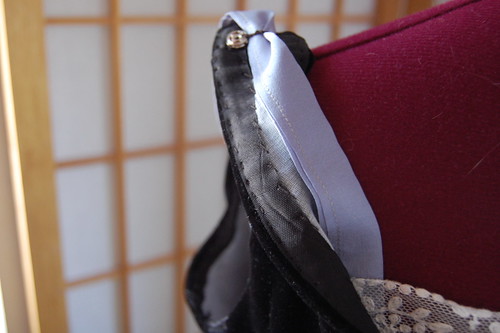 During the 1920s, dresses often had skinny straps and were worn with slips with even skinnier straps. This can lead to much frustration! One solution for this was a lingerie pin. These were pins, sometimes decorative and sometimes simple, that could be pinned into the shoulder of a dress to hold the straps. Unless I wanted to fight my straps all night, which I don't, I needed such a thing for my gala dress. I decided to put a permanent solution into my dress. Now, when I first heard about these pins years ago, I have a vague recollection of seeing a dress with them in the shoulders. However, don't take this as documentation! I'd love to see where I saw that, or another example, but I decided that I would just go ahead and make them in my dress. Mine are based on a modern dress that I own that I found right after reading about these for the first time. I was quite excited to see them in a modern dress! 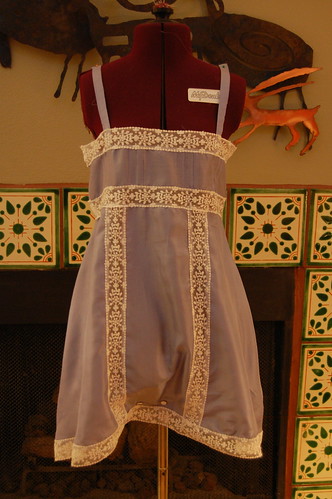 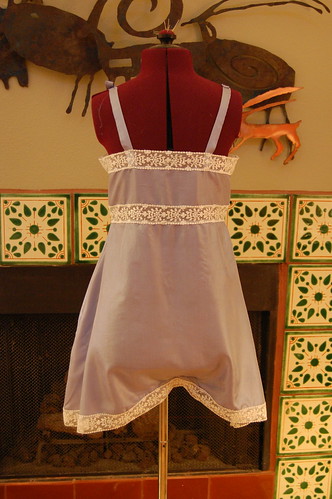 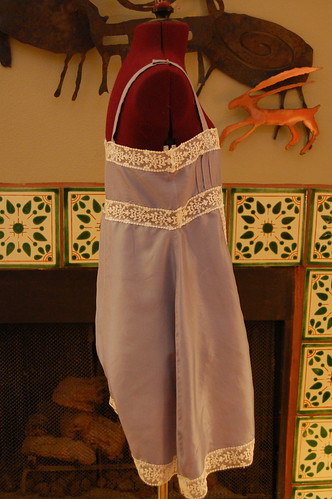 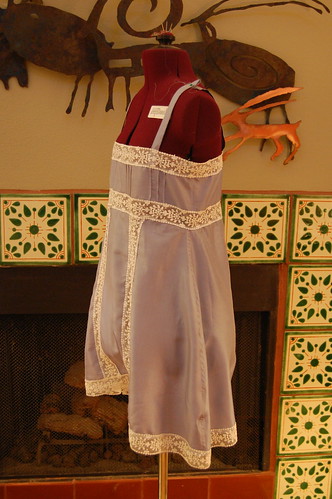 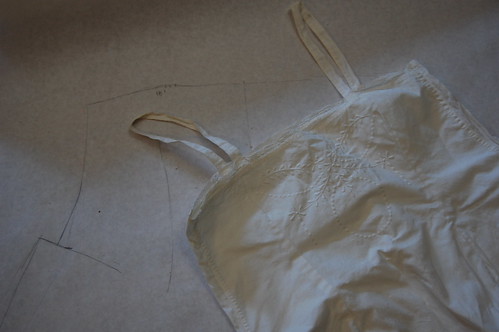 Yes, I have three names for one thing in the post title. You can't step in to them, so step-ins isn't quite right, but I wanted to include it because it's so similar. Combinations was a word that had been in use for some time, and teddy was a new word. I'm just covering different options!

I received an adorable 1920s teddy as a gift. It's absolutely perfect to wear under my upcoming tennis dress, so I thought now would be the perfect time to pattern it. It's quite simple, made of a front, back, straps, and crotch piece. There's extra fullness at the hips from a slashed and gathered dart. It's made of a heavy, crisp cotton. I'm making my reproduction in Southern Belle cotton that I bought at Nancy's Notions. It's not the same weight, but it has a nice crispness and weight to it.

The teddy is mostly machine sewn, with hand sewn buttonholes, lace hand sewn on, hand embroidery, and an alteration done by hand.

I'm reproducing this fairly closely. I'm not doing the alterations, where the sides were split and lightweight fabric was added, and I'm not doing the embroidery (at least for now!). I'm doing my best to follow the techniques of the original. I'm including a pattern from the original as well. I did realize after making it that I switched the order of sewing the dart and side seam. On the original, the side seam was sewn, then the dart. I sewed the dart, then the side seam. Eventually I'm going to do a detailed write up of the original on my other blog.