I am not a perfectionist. I'm so far from being a perfectionist that I actually proudly show my friends my non perfectionist work and we laugh. And I absolutely love this orignal natural form bodice on my website because it's made the way I make clothes. The outside--it's lovely! The inside? Well, it's done, isn't it? A few loose threads, sewing that seam by machine twice and overlapping the seams, whipping the seams at not perfect angles to finish them--that doesn't hurt, right? Can I do things like that and other details perfectly? Well, except for decent backstitching in heavy fabric and buttonholes, I pretty much can, but I have no desire to, and I blame that on starting a costume collection early on in my costuming career. Everything I own has a mismatched seam, or piecing, something to make you unhappy. When you think of our costumes as clothes that people would make and actually needed to wear (no two months until the event luxury!) and quite likely would want to remodel, it makes sense to think that they would spend time on the areas that counted--those that showed. 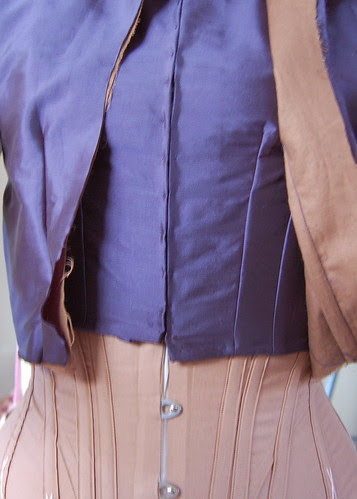 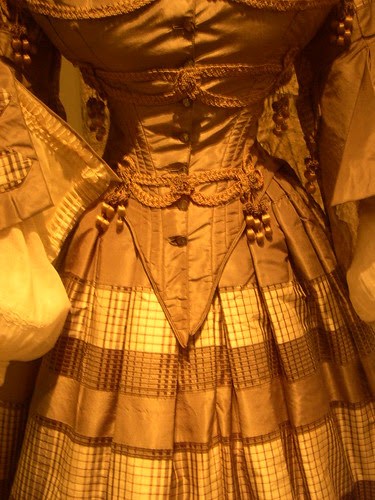 And here we have a dress of mine--the Spotty Dress--and a dress in the Museum of London that's patterned in The Cut of Women's Clothes. And what do these dresses have in common? The fronts don't match.

I measured carefully, and lined things up, and when I sewed the hooks and eyes in, things looked a little off. Not too badly off though, I thought, thinking of having to rebind the hem, or reset the hooks and eyes in case small differences in their placement were causing the issue. And then I tried it on, and well? It was awful. A good, very obvious half inch. Only, it wasn't obvious. This was the underbodice, the overbodice can be seen open in the picture. It wasn't going to show, so, what would they have done? Well, maybe if this dress had been made for the Princess of Wales, they would have fixed it. But I think most Victorian seamstresses would've left it--it does nothing to the structural integrity of the dress, it would take absolute ages to fix, and it doesn't show. And I had already sewn the hooks and eyes in with big, visible stitches knowing they'd be covered. So that's what I decided, and I finished the dress, wonky underbodice left alone. And, I had seen something to back up this idea.

When I saw the dress on the right in the Museum of London, not only was I happy to recognize a dress from a book (It's like meeting a celebrity! Each familiar dress I totally fangirled over), but it had one of the prettiest sights I've seen on an original dress. The point on this gorgeous, silk, highly detailed dress, was clearly not matched. I can only imagine the seamstress' dismay when that happened. But she decided to go with it, and the dress remains lovely.

And back to my dress, if someone would leave a visible mismatch, wouldn't someone also leave an invisible one? Quite often, I think it's the tiny imperfections--mismatched points, stress wrinkles, picked out seams--that make these dresses seem real and remind us that actual people made these. Why not leave those little imperfections in our own dresses too?


Posted by Katherine Caron-Greig at 7:16 PM

Email ThisBlogThis!Share to TwitterShare to FacebookShare to Pinterest
Labels: a note, the spotty dress