Since the rest of this tutorial tells how to make a sacque with the skirt and front bodice cut in one, but many sacques--especially later ones--were cut with separate skirts, I thought I'd go ahead and update this tutorial!


I'm mainly basing this off the robe a la francaise in Patterns of Fashion 1.

This tutorial picks up after Part Three, The Back of the last tutorial. No need to repeat myself!

The only difference between the pleats in this dress and the rest of the tutorial is I made them narrower, and to do this, I put a small pleat under the back pleats, as seen in this entry on a cotton sacque at The Sign of the Golden Scissors. 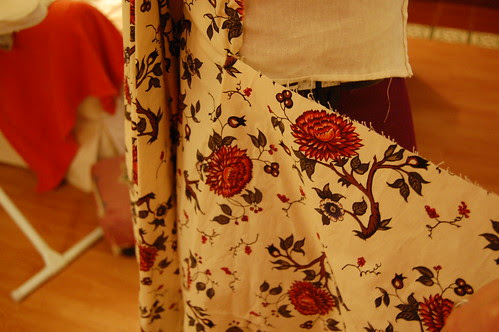 The back is pleated, the side back pieces sewn on, and it's ready for the side skirt to be pleated in the above picture.

The side back pieces are quite simple to sew on. I like to start them about an inch above the lining (wiggle room is always good!), then just sew with a running stitch to the hem.

The side skirt on this sacque is different than the chocolate francaise. While that skirt was straight, the pieces of this skirt are gored. The back of the skirt is straight, and the side piece has one straight edge and one gored edge. The straight edge of this piece is sewn to the back skirt, and the gored side is sewn to front skirt, and left open for the pocket slit at the top. The front of the skirt is essentially a trapezoid, with two parallel gored edges. This makes much more sense with the pattern draft in front of you! 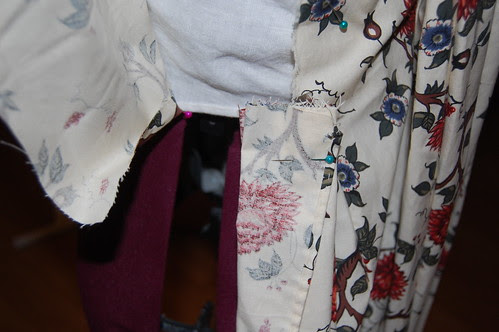 The pocket slit will be on the gored edge of this piece. Hem that first. It's much easier when you pleat it! Just hem about 8 or 9 inches from the top. Then make stacked knife pleat as shown, with the hemmed edge of the pocket slit on the outer edge. 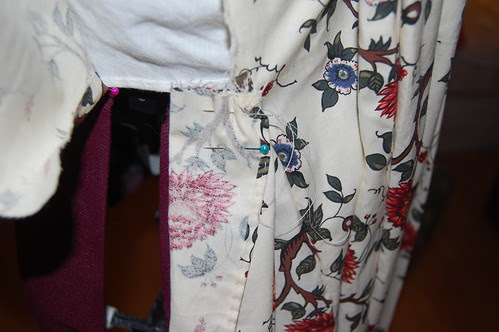 Baste that into place. Later, you'll sew it to the lining, but basting it now makes it much less prone to wiggling out of place later on! 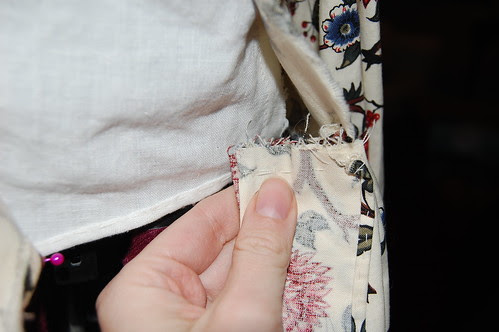 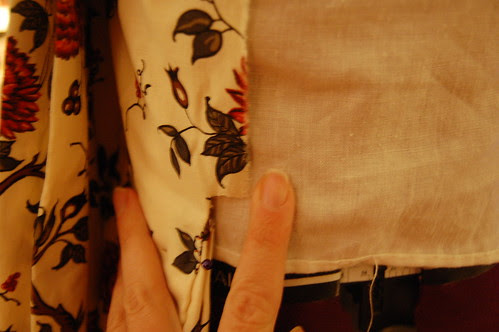 And yes, these pictures are from opposite sides of the skirt! 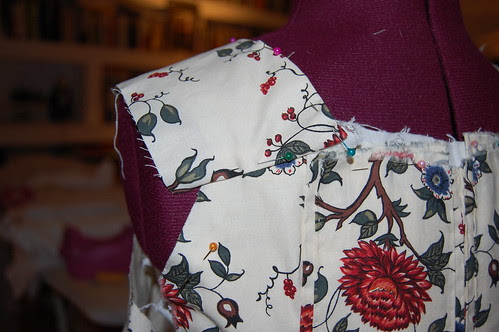 Now it's time for the front pieces. I cut these to the same size as my pattern pieces with a little extra seam allowance. Because of my figure, I didn't need to dart this piece, but they usually were darted. It'll be hidden by trim anyway! It's a figure specific thing, so look at a few originals (I do suggest that a lot, don't I?) and do what your figure needs!

I started at the back, and pinned the bodice piece into place, folding the edge under as I went. 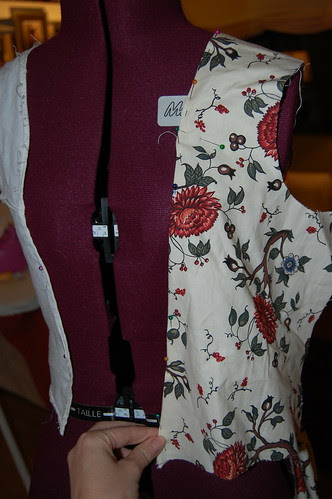 Then I continued down the front edge, pinning and smoothing as I went. 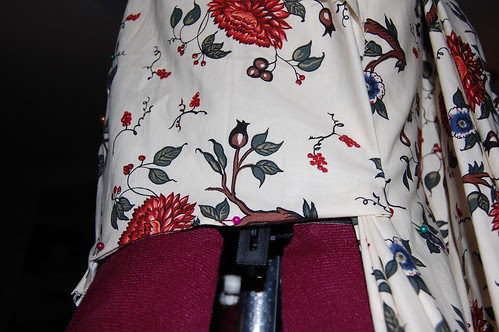 Then I continued at the bottom edge, still smooothing... 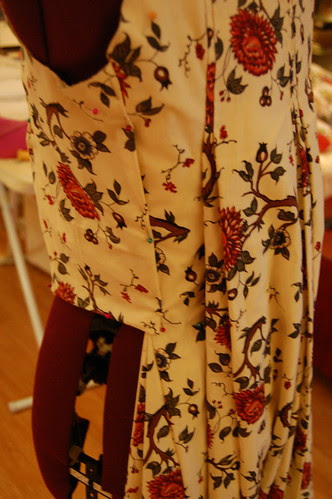 Then, up the back. Still smoothing, of course! It should extend just past the back pleats. Don't worry about following your lining's seamline. Just make an attractive angle.

And now, sew all that down! I used a spaced backstich and point a rabbatre sous le main. A much easier stitch than it sounds, really :) 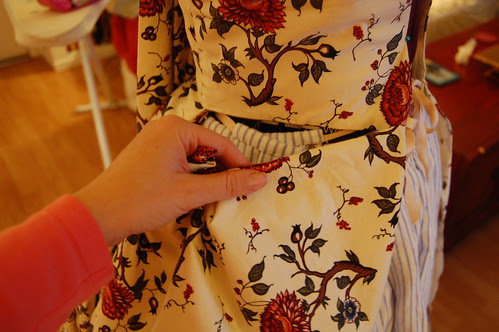 And now, the skirt! It's topstitched on based on an example in Fitting and Proper.

Hem a few inches of the front edge opening, or turn it under as if you were going to hem it. Then fold the top edge over, and pin it to the front of the skirt. Now, the front panel is slanted, so you need to make the fold deeper at the opening of the skirt than the side seam. Here's the fun part--play with the pleat until your skirt hangs correctly. 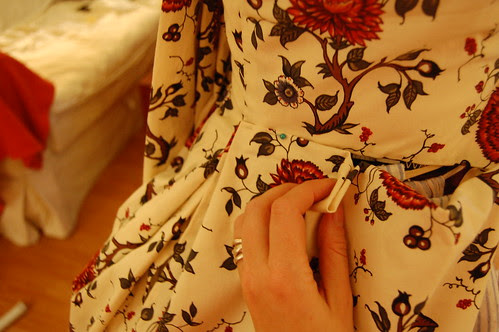 Now you're going to make a stacked pleat to mirror the back pleat. Again, the pocket slit should be hemmed. To do this, I just pinned the first pleat, then continued making pleats over that. Once the pleats are done, pin the rest into place. 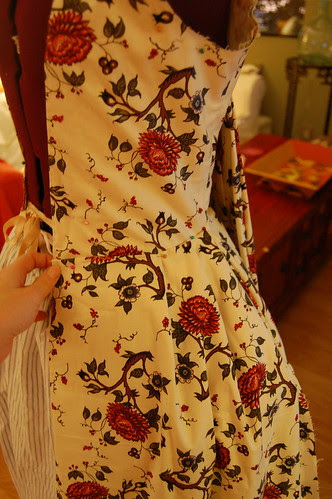 The kind of finished skirt pinned on! It just needs the stacked pleat. I initially read the draft incorrectly, and then forgot to take a picture of the correct way! With the extra pleat, it didn't hang right over the pocket hoops. Uh, oops? :) 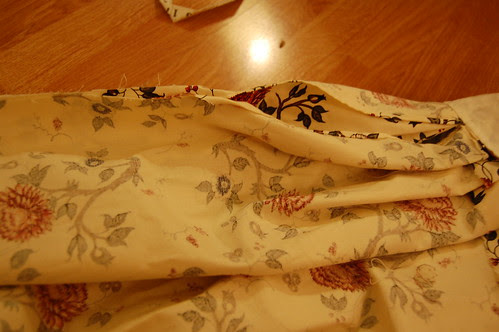 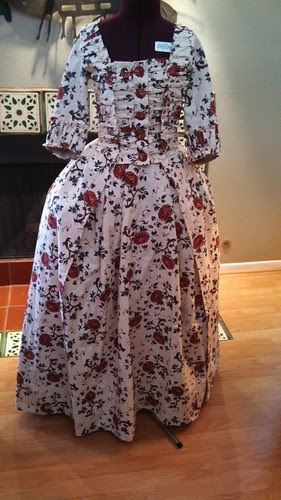 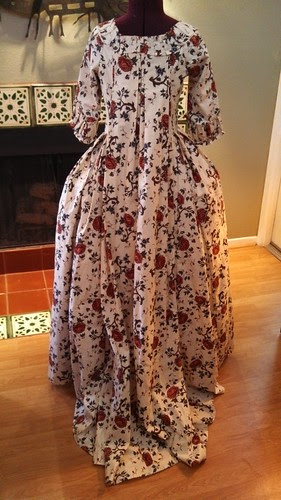 And here's the finished dress! Admittedly, much was skipped in this part of the tutorial, but it is all covered elsewhere!

Robings--I left robings off this dress. It looked like some originals were done this way, and my fabric is a quilting weight cotton--I really didn't want to add extra weight. Here's my Pinterest board of cotton sacques

Now, if you want robings, you can make them like the ones on my anglaise, or you can cut the bodice piece extra wide, and then make them like on my chocolate francaise, except, of course, just bodice length. I was going to do that on the yellow sacque I just made, but make a cutting mistake and did it like the anglaise. Oops. both are period, right?

The stomacher--This dress has a compere opening--basically a split stomacher that closes with buttons. To make it, I traced the stomacher I made in this tutorial, and added a little overlap in the middle.

Sleeves--The sleeves on this are sandwiched between the lining and the outer fabric. I initially made them with the sleeve cap on top, but then I decided I wanted the narrower trim many original sacques seem to have. I have two sets of sleeve instructions up. these are the more detailed, and these show sleeves covered by robings on my chocolate francaise.

I believe this covers everything! For some reason, writing this one didn't come easily, well directions are never easy, but even less easy than usual! So please, if you have any questions, ask them! I do want these tutorials to be very, very helpful! I've already edited my anglaise tutorial based on a question, and I found an unclear spot in my francaise tutorial today as well. So please, do ask!

Posted by Katherine Caron-Greig at 7:58 PM