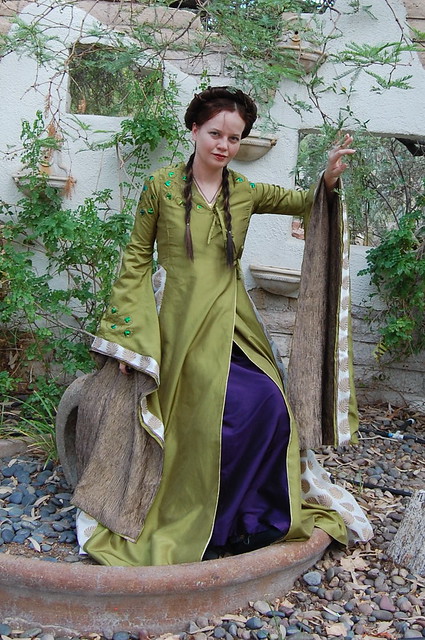 I've practically written a novel about my Game of Thrones dress--the ten posts I've written are linked below! It has been such an enjoyable project though! I very much want to make another--I'm thinking one in the style Cersei wears to the purple wedding. What I enjoyed so much though, was they've truly created fashion on the show--clothes for different climates, different levels of society, different everything, yet they remain consistent in fashionable details. It was almost like discovering a new historical period. The style dress I made, for example, is heavily embroidered for Cersei, has a little embroidery for Sansa, and is trimmed with contrasting fabric for Ros, yet the lines remain the same. (Three samples are on my small GoT Pinterest board.) I wanted my dress to be between Sansa's and Cersei's, as would fit an adult member of a noble house. In my case, House Caron of Nightsong.

My hair is done with two hairpieces, a roll mounted on a band, and twists attached to a braid. A tutorial is linked below. I styled my hair a little differently this time though. Instead of pulling it all back, I did a center part, waved it with a triple barrel curling iron, and twisted those parts and pinned them under the band. This hid a little of my very high forehead.

I made my own pattern for the dress and underskirt. I plan on tracing my pattern and adding a scaled copy to the construction posts. Hopefully this week! I'll edit this post when I do that :) 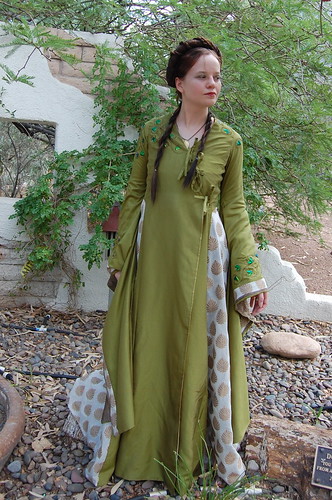 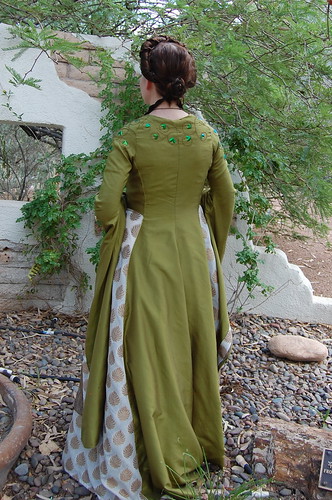 My dress is made of green silk taffeta (that I washed with baby shampoo), cotton/silk metallic brocade, crinkled metallic silk, and yellow/gold plain silk from Pure Silks. The bodice is interlined with lightweight linen from Dharma Trading. It's embroidered with beads, beetle wings, and gold thread--all these are linked in the beetle wing embroidery post below. It's edged along the neckline and side panels with 3mm Italian tubular mesh from Mimi's Gems that Michele Carragher used on her embroidery for the show. If you haven't seen her site--do visit. It's beyond amazing! The underskirt is purple silk from Thaimpex on Etsy. It's a softer silk taffeta than most, which was perfect for my purpose. 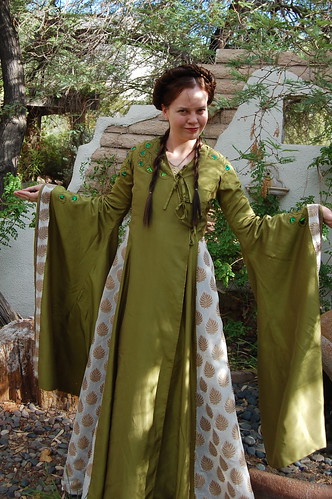 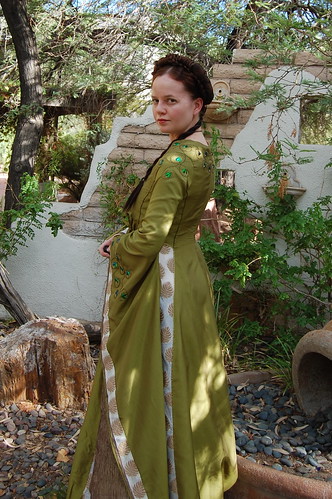 To get the dress to drape the way I wanted it to, I washed the silk taffeta. The texture of the silk in this picture of Cersei's aqua dress reminded me of silk taffeta that had been washed. I suspect they dyed their own fabrics for the show, which would give the same texture as washing. Though a little scary to do, I was very pleased with the texture of the washed silk. 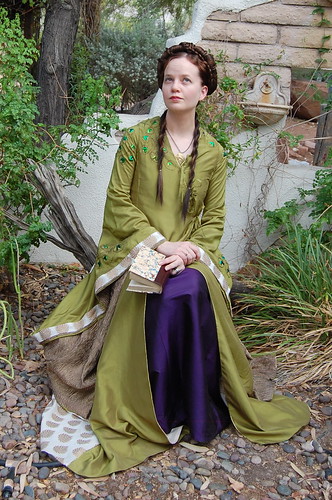 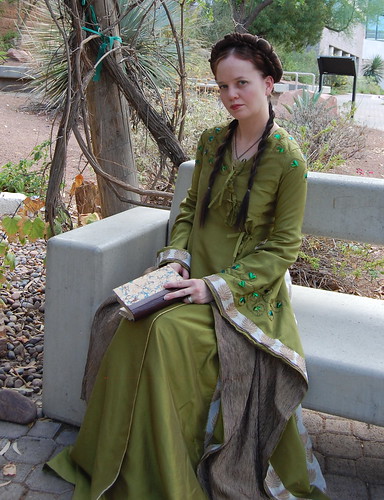 I decided on dark purple for the underskirt as it would be an unexpected pop of color with the muted green. Sansa's contrasting underskirt can be seem here. The wrap on the dress is quite shallow, so it does show when you walk or sit. 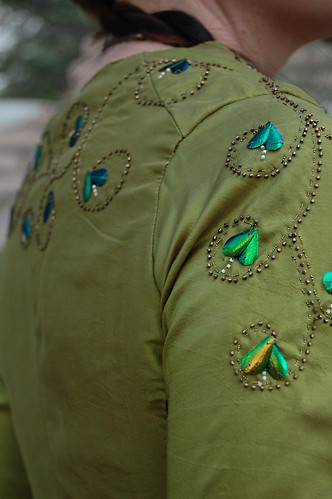 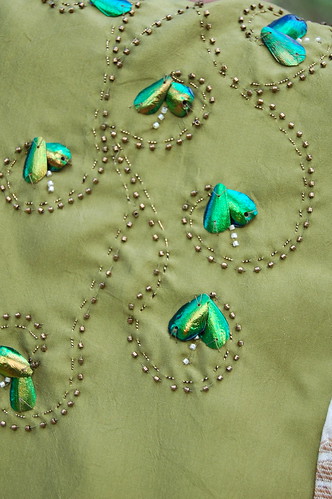 I couldn't resist showing some close ups of the embroidery! The beetle wings are just so wonderful in sunlight. For most of the wings, I used the bottom half of the wing. In the picture of the sleeve cuff on the right, you can see some slightly bulkier wings. These are the top half of the wing. 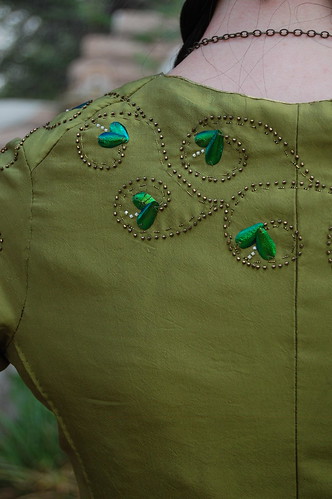 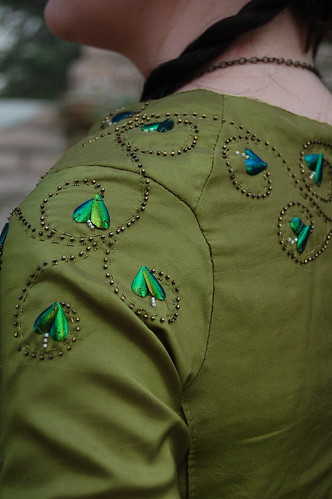 Instead of embroidering first, I did basic construction and then embroidered. This meant the embroidery lined up with no worries. A description of how I transferred the embroidery pattern to the almost finished dress is linked below. 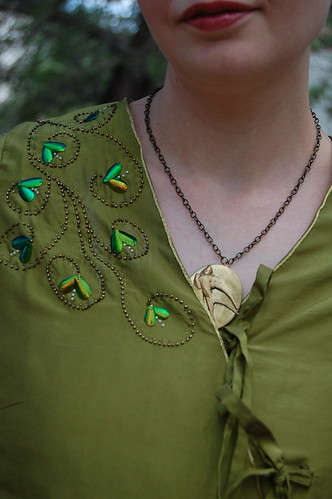 My locket is the House Caron sigil--a nightingale. I bought the locket on Etsy. I also have an embroidered bag, linked below, with the house words--No Song So Sweet--but I forgot to take the bag to take pictures. 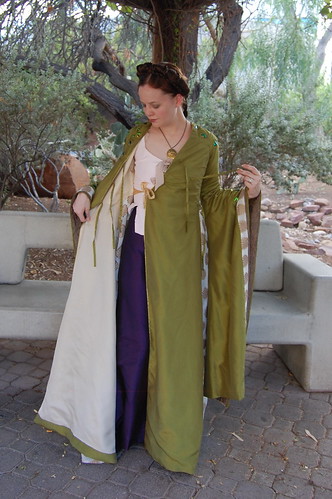 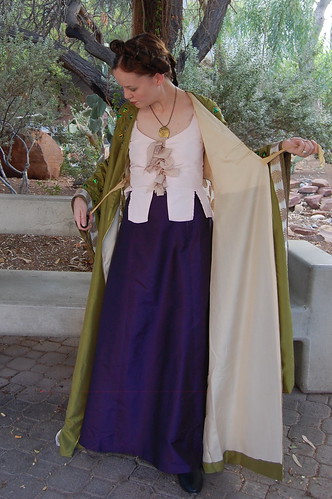 The dress closes with functional ties. I suspect the dresses on the show have internal closures. In some shots, it looks like they're held together at the very top of the crossover. I just used three ties on the outside, and one on the inside waist. 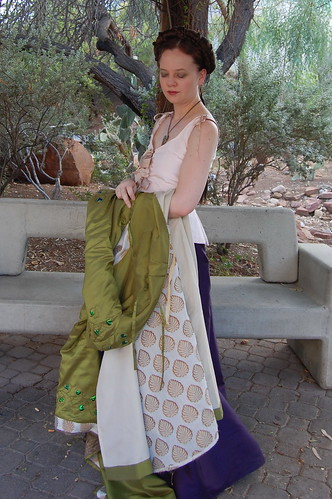 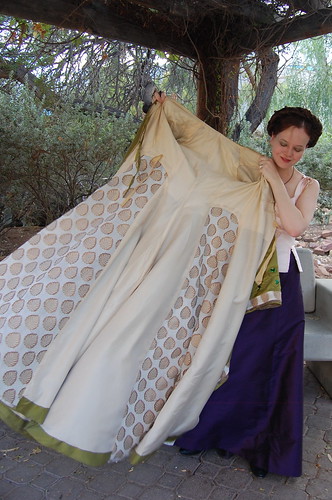 It's a little hard to see, but on the underlap side, I added two small darts to the neckline. I stretched the neckline while embroidering, and it didn't sit quite right. I also ran a few gathering stitches in the lining to pull it up a bit. Interestingly, Cersei's aqua dress does the same thing mine did. I think I may be on to something! 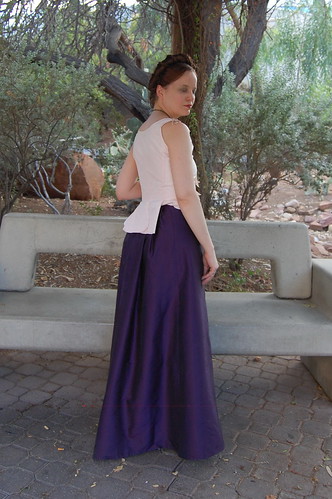 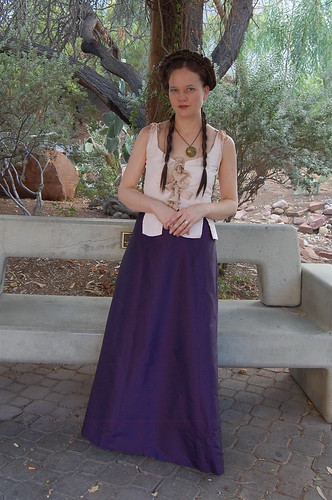 Both Cersei and Sansa wear strapless, front lacing 18th century style corsets under their dresses. The outline of Sansa's corset can be seen here. They're also visible in some of the less, uh, pleasant scenes. I had intended to wear my almost finished stays under the dress, but I didn't like the way they looked underneath--I love the figure they'll give me for the 1780s, but it was too smooth for this dress. In the spirit of 18th century stays though, I wore an 18th century waistcoat that I made for a lounging outfit. It's just my basic 18c pattern lengthened with tabs, and tied at the front and shoulders. 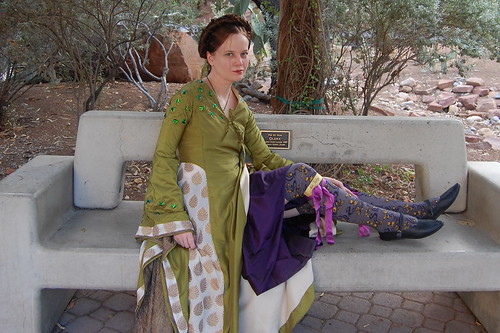 My stockings are the Phoebe Over The Knee from Sockdreams chosen because they're quite pretty and my house colors, and my shoes are the Juliet Garden Shoe from Revival.us that I use for early Renaissance and Medieval costumes. 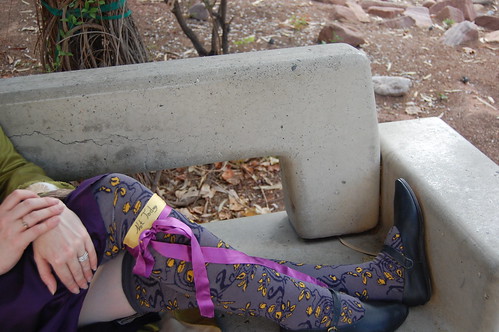 And my Not Today garters. These are inspired by historic garters with phrases such as Stop or Do Not Pass. A short tutorial is linked below! 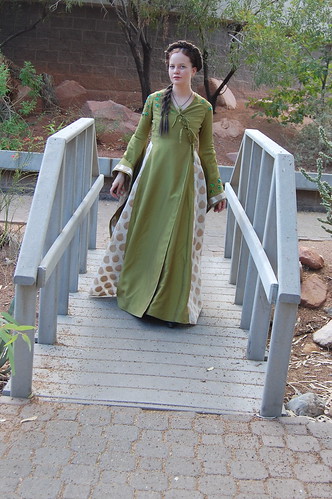 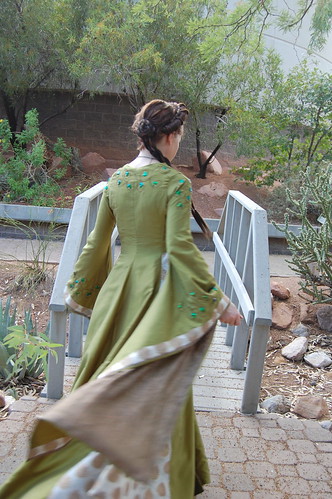 And just a few pictures to show how the dress moves. 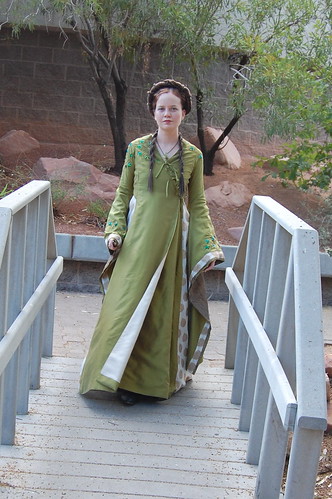 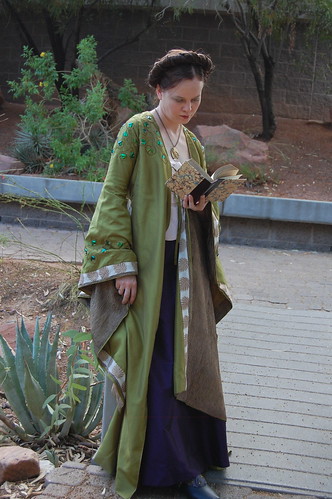 More movement, and the dress shown open. It was very warm out--about 100 degrees.

So I seem to have written another novel about this dress! I really couldn't be happier with it though, and hope to get to wear it many times!