And now, at last, bodice construction! I'm just going to give a slightly edited version of what I posted when I was making it. It is a highly odd bodice, as there is no visible front opening. We managed this by having a center front closure in the lining, a layer that closed over that, but didn't close center front, and a plastron to fill in the center.

This dress at the Met was invaluable in figuring out what to do, as was information about a dress Kat had seen and shared with us.

So here are the entries, not really polished. I think it's interesting to revisit what I was thinking at the time, anyway! I put a little summary after each date to hopefully clear things up a bit :)

From 15 March--This is the first time I tried the finished bodice on, after adjusting pieces of my existing 1860s muslin to give the right look.

Since I had the corset on, I figured I might as well pin in the darts, right?

Remember that part in the skirt muslin where I said imagination is necessary? Well, it's needed here too. Yes, it's the "finished" piece, but trust me, all my bodices look this terrifying in the darting stage! 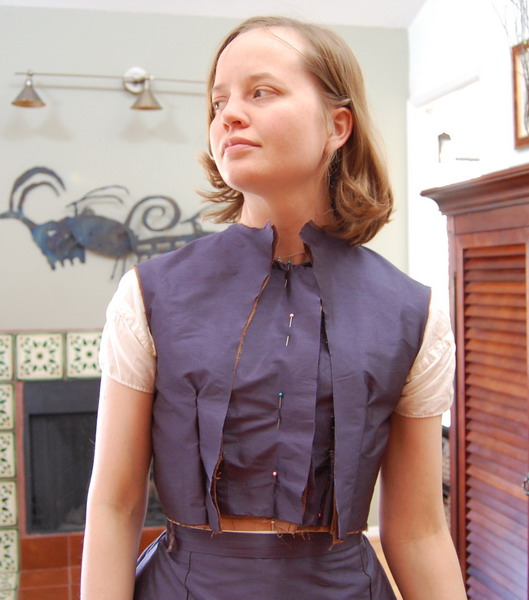 Here it is closed. The curvy edge will be finished with bias tape. The spotty part that goes under the lapels will be applied here--with the end being bound with the bias tape. Then a "stomacher" of spotty silk will be sewn into my right side and it'll hook and thread eye up my left side.

The neck probably is a little high, but maybe not. The picture is making it look a bit wonky. It's easily trimmable, and is getting the collar, so it will be shorter. I wanted to put the collar on the outer piece, not the inner as the lapels go up to the collar and I thought they'd look better sewn under the collar, instead of to the under part like in Kat's example.

It'll, of course, once it's sewn, the two pins that have fallen out are back, and it's inserted into the waistband, be tighter. The back will be gathered up just a smidge, as I think the original is. 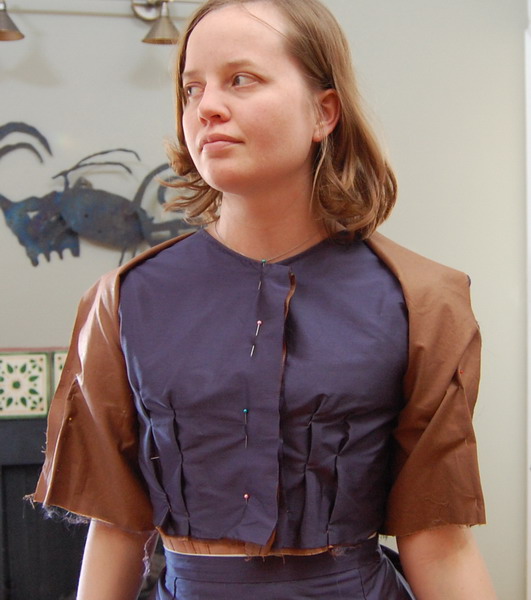 Here it is open. The center front will close with edge to edge hooks and eyes. This part won't go in the waistband. As you can see, it's shorter than the outer part. This is heavily based on sheer 1860s dress construction!

From 24 March--Here's what it looked like once I got the hooks and eyes in. And no, I never got around to fixing that difference (as of 11 August, so that tells me it will never happen). It honestly would've been too much work for something that doesn't show! 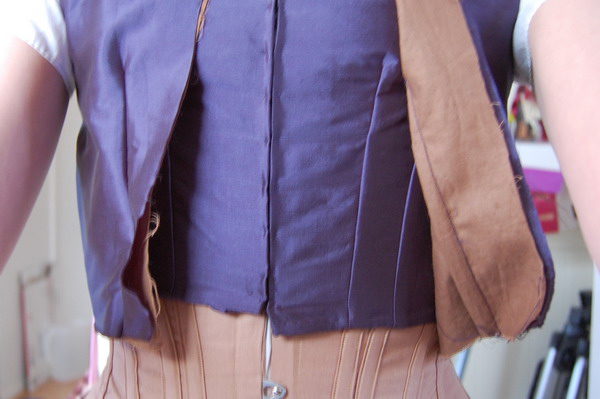 Look! My bottom edges don't line up! And since it doesn't show and would be tons of work to fix, I can't bring myself to care :)

Also from 24 March--We put pleatings of spotty silk on the front. The raw edges are covered by the lapels. We left them raw to reduce bulk--folding them under would've made unnecessary ridges. 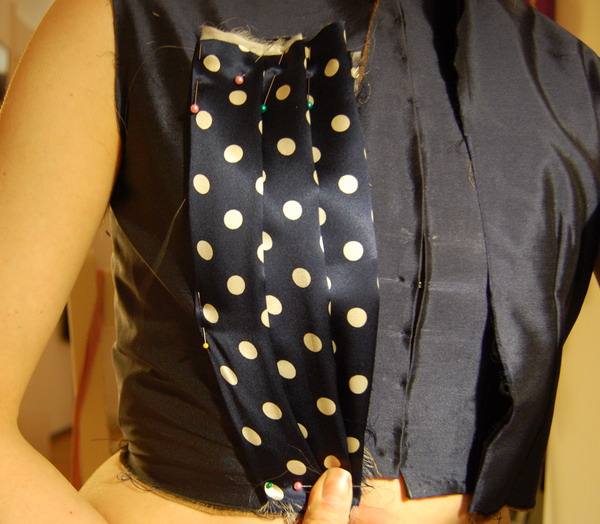 I was so nervous about this part! And it looks just like I wanted to! The spray basting worked wonderfully!

The lapels will be applied over this.

Now for the hard part--make the other side match.

And then the other hard part. Baste it in just the right places so it stays where it should.

Continued in the next post! I don't want a complete novel here, you know :)
Posted by Katherine Caron-Greig at 2:25 PM