After much staring, it was time to start the skirt. Now, I have pictures of putting the skirt itself together. The construction method I used was mainly from an overskirt I own. For those of you familiar with 18c construction techniques, I used the sew outer fabric and one layer of the lining, then whipstitch the next layer of the lining to it method. However, I haven't written that part up, so I'm going to start with my analysis of the ruffle--mainly an explanation of why I did it the way I did. Then, actual ruffle construction in the next post.

As I'm fast approaching base skirt completion--2/3 a hem binding through the hem!--I'm considering skirt decoration. And here are my obsessive ramblings. 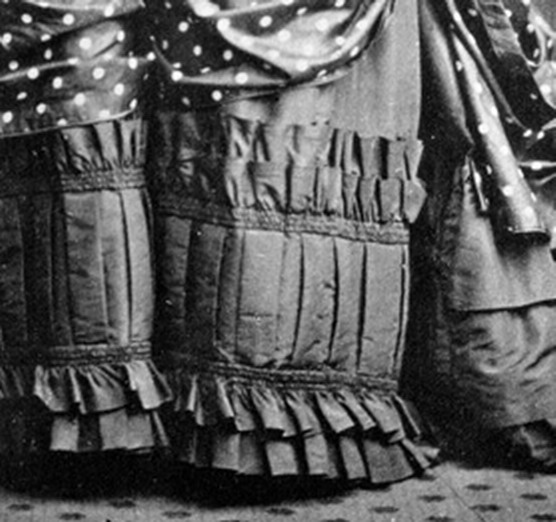 Here we have the pleated, gathered, puffed, up ruffle of doom and questionable tastefulness.

So, here's what I'm planning on doing. I'm going to take a piece of blue silk twice or so as wide as I need it to be. Then fold it like bias tape with the ends in towards the center. Then pleat and baste it in place. I'll start it where I want it to stop then just pleat around--no measuring!

This will be fine for the bottom--it just has to hang. But the top will flop. So, run a gathering line through it and baste it there. Sewing the pleats down would be too pleaty, which isn't an issue if they're hanging, so, a gathering line.

Next, the ruche-y bits. This is the same as the Halloween dress. Take strips the same length as the pleats and gather them as needed. Leave the top edge raw and fold the outer edge down so the edge is caught in the last row of gathers--essentially a deep hem.

Then, place it right side to right side on top of the pleats, sew it down. Flip it up, machine sew through the lines of gathering stitches, and voila! Pleats and gathers and prettiness! Oh, and questionable taste :)

The doubled silk will be very good as it is a thinnish taffeta. It's really a super pretty one though. I'm surprised how nice it looks in use.

Also, I just noticed that Marie's doom-y ruffle is taller than Alexandra's. Neat!
Posted by Katherine Caron-Greig at 1:17 AM