Well, hasn't it been ages since I've posted? Let's, uh, blame Costume College! Anyway, ages ago, I promised spotty dress construction, so I thought, might as well begin, especially as I have several posts already written. Therefore, I am slightly cheating :)

So here's a repost of a post originally made on 8 February 2011 on my Live Journal and was just for a small number of people who provided that much needed encouragement and advice. As a masquerade costume, it needed to be kept rather secret!

So here we go, patterning the spotty skirt!

I actually made a skirt muslin! I'm sure this is amusing to no one but me, but it's very much out of character.

Now, my muslins aren't other people's muslins. They require imagination. But I think I like the skirt shape I came up with.

I didn't sew it (let's not get crazy here). It's just pinned. 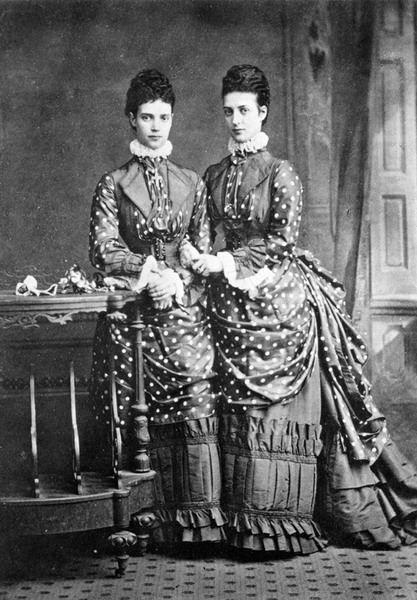 I ended up taking an inch of flare out of the bottom of the center piece and side piece. Repinning a skirt while wearing it isn't fun! I jammed my left middle finger with a pin quite nicely...

It doesn't look as straight as their skirts do, however, once it's in silk lined with cotton and trimmed, I think it will be. The Halloween skirt is much straighter.

The side picture below also makes the skirt look a little wider than this picture does. It seems a little more natural there, so I think it looks a little narrower here do to intense train fluffing.

Also, ignore the too short thing. It had to clear the floor for the fitting! And again, ignore the badly pinned side pleats. They're enough to get the idea! 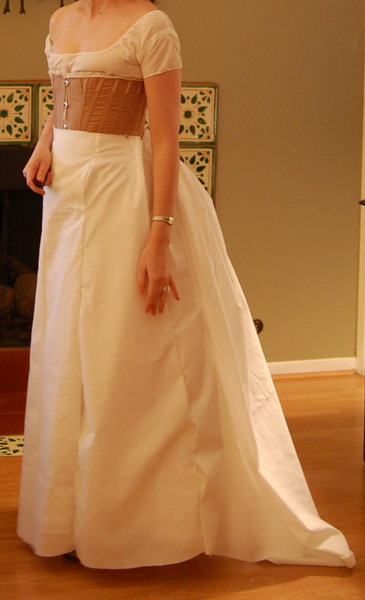 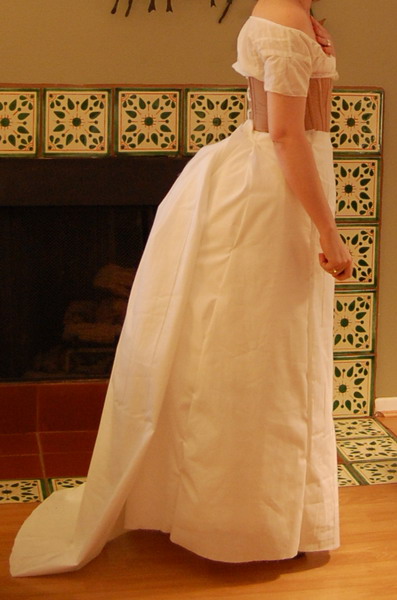 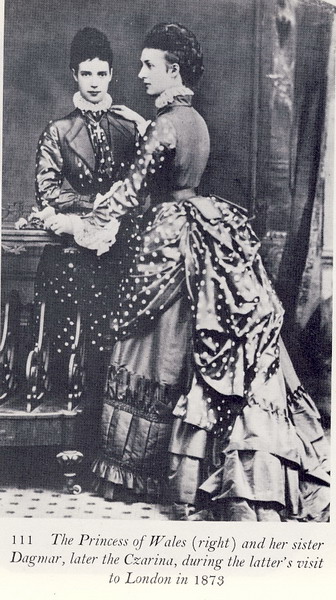 To change the back, I used a full width of muslin and didn't pouf it up. I think it'd be helped by using a full width of silk--I think it's still a little narrow--but I'm lazy when it comes to muslins and, well, imagination! Having someone to fluff the skirt out and all the flounces to stiffen it will help too.

Also, I didn't bother with the back yoke--these dresses don't need a flat spot there, so no yoke nonsense.

The skirt is very badly pinned to some other thing that's around my waist. Probably the petticoat. I just hope I don't rip anything taking them out :)

Anyway, to get the train to flop over the front, I concentrated the fullness more towards the side back piece than the center back. That took a bit of futzing to come up with. Also, the skirt does "tie" in back. Why the quotes? I have some badly pinned in pieces of muslin imitating the ties.

The back is also just large pleats. Gathering will give it a softer look, more like the original.

I'm wearing it over my new bustle and corset and my old bustle petticoat. The corset looks way prettier when you can see the whole thing. I have nice waist definition, but I always think just the top part of my looks way off balance in a corset because I have to make them so short since I have zero chest. Trust me, it's a super pretty little corset :)
Posted by Katherine Caron-Greig at 1:08 AM