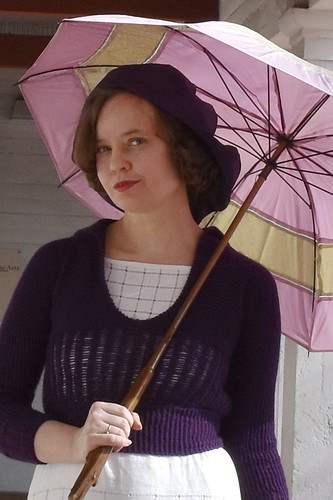 I made this sweater almost by accident. I bought the c. 1921 Bear Brand Blue Book on Etsy and found a few patterns in it I wanted to make. They called for Shetland Floss, so naturally I wanted to find out more about it.  I do have a sample of it from Peace Dale Yarns, which I wrote about here, but was interested to see if I could find any from Bear Brand, details about the weight, or how much yardage was on a skein.  Instead, I came across The Diane Sweater in an ad for Fleisher's Yarn in the April 1921 Ladies' Home Journal that claimed it only took a day and a half to make.  While I knew that it would take longer--it took about a month--it gave me an actual reason to make something and consistently work on it--something I haven't been able to do since all events were cancelled--as they should've been--this year.

I took these pictures by myself with a tripod, and so look forward to when we can get together again.

My version of the pattern can be found here. I've rewritten it and fixed a few of the errors in the original pattern. 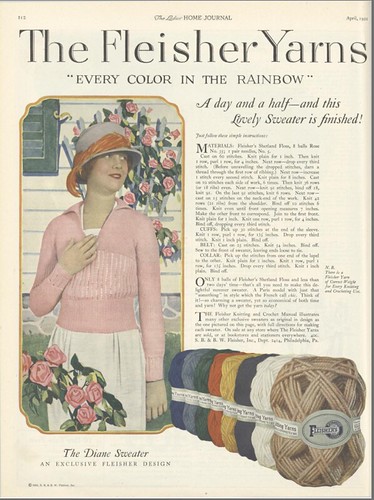 This sweater has something in common with the sweaters and dresses in the Bear Brand Blue Book--negative ease. The dress I'm currently working on has a finished measurement of about 29 inches, yet is sized for a 34-36 inch bust. This sweater doesn't give gauge, but assuming that it has the same gauge as the similar patterns in the book, has a finished bust width of about 26 1/2 inches.  I found this interesting, and it made me want to see just what was going on. Garter stitch is stretchy, but that's a lot of negative ease!

I happened to have a cone of JaggerSpun Maine Line 3/8--a sport weight yarn that gives a gauge of 5 stitches an inch--that I was using for a shawl that I probably wasn't going to finish, so decided to use it for the sweater. The 3/8 yarn is heavier than the sample of Shetland Floss that I have, but it gave the same gauge. I think this is why there are differences between my sweater and the sweater in the ad.

I found a page with a version of the pattern as well--which although I didn't use, is still good to share! 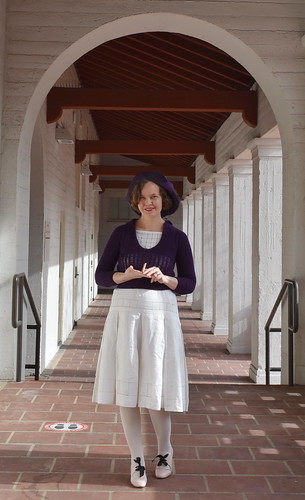 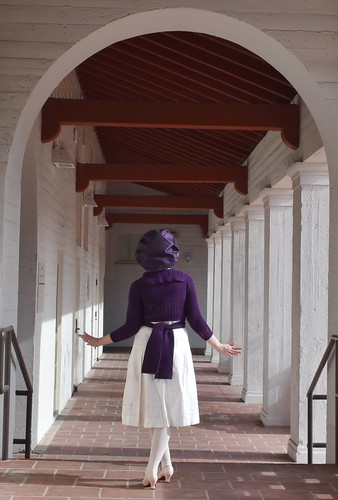 Still, I'm very happy with this sweater! It paired nicely with my 1920s hemstitched tennis dress, which was a pleasant surprise--I had an accidental full costume! All I needed was a hat, which I made from view 1 of Mrs. DePew's 1920s Tam O'Shanters and Hats pattern. It's unlined purple taffeta. The only adjustment was I needed to take about an inch in from the band. 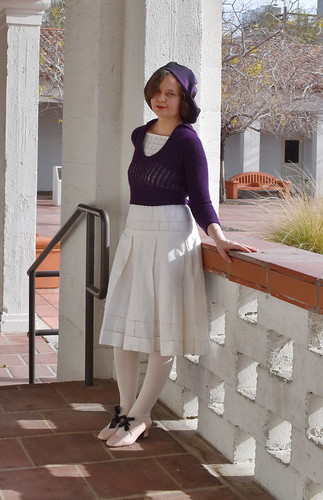 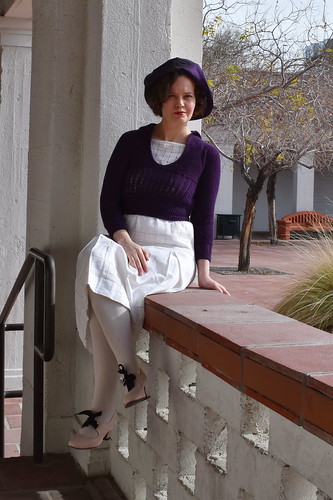 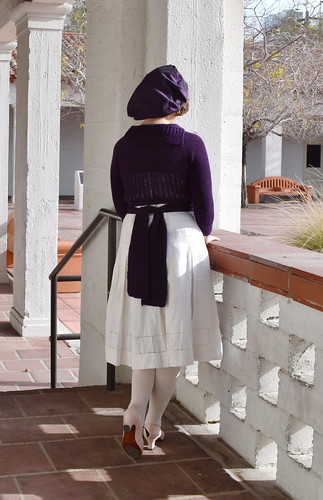 In addition to the bust measurement having negative ease, the sleeves do too. They're 70 stitches, or 14 inches long.  When I tried the sweater on (very carefully because it was pinned!), they were barely past my elbow.  The advertisement shows wrist length sleeves. I thought this was strange, but the sleeves appearing to be too short was true of the patterns in the Bear Brand Blue Book, so I didn't try to change it. I thought that maybe the tightness of the cuffs pulled the sleeves to the length they were supposed to be. The cuffs are only about three inches long, but are fairly tight---and would be tighter if I followed the pattern exactly. It doesn't mention increasing back to the original size after the decorative dropped stitches and was just too tight to make it over my hand easily. 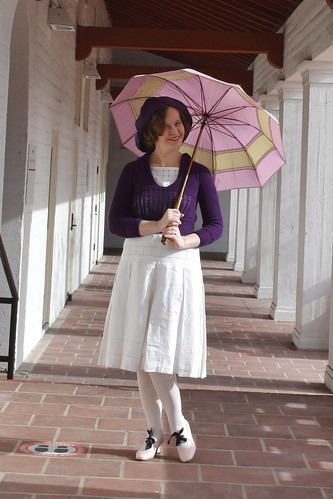 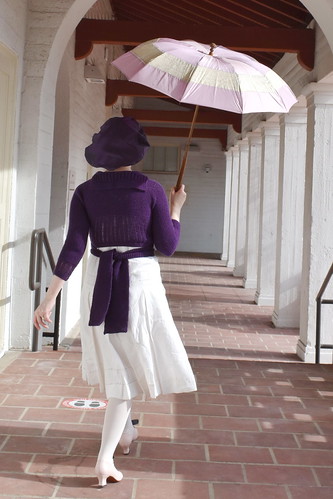 I took pictures at a school built in 1936. It has a gorgeous courtyard, which I think was supposed to be locked when I visited last March! Still, the corridors outside the school were quite pretty, and it was quiet for me and my tripod on a Sunday afternoon. The parasol is one I recovered in 2012. 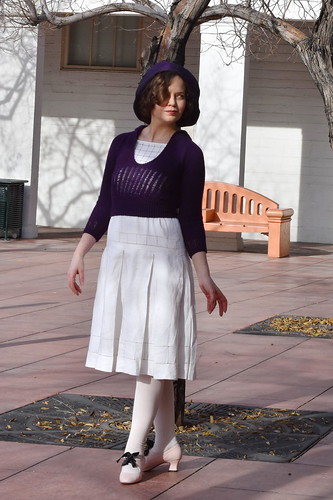 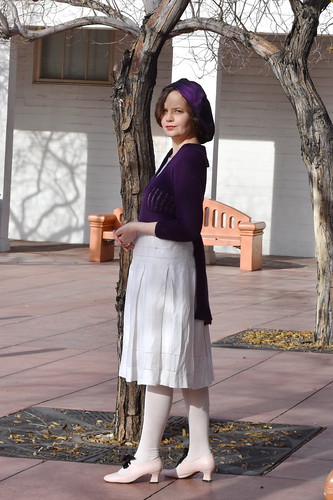 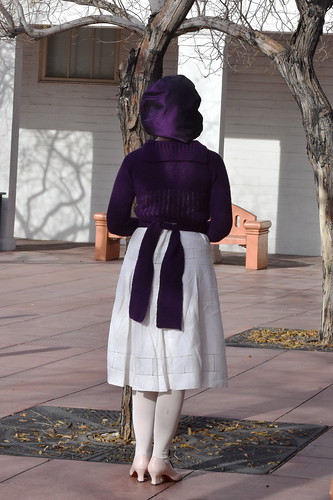 A few more views. I found the way the tie looked best was to just tie it once. The texture of the wool keeps it in place. I did have to tighten it once or twice, but it looked better than a knot, so I thought that was an acceptable choice! 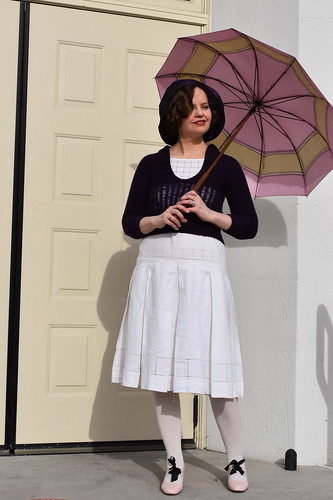 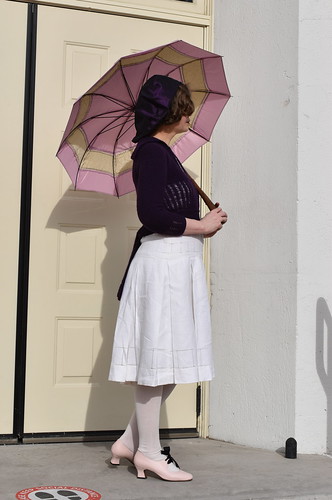 In front of the doors at the side of the school's original gymnasium. The front entrance is very pretty with a triple archway--and fenced off!

Posted by Katherine Caron-Greig at 12:31 PM