I used my 1920s base pattern for the bodice. I've had it for several years, and can't remember what it started as. It's a very simple shift shape though. The skirt is straight panels box pleated, based on the pattern in Women's Wear of the 1920s. It's about 110 inches, or two widths of linen. The hemstitching on the bodice is done by hand, and explained in this post. The neckline and armscyes are bound with self bias. The belt is very simple. It's just a tube of linen without a closure that I pull over my head. The belt buckle is a mother-of-pearl buckle I bought on Etsy. 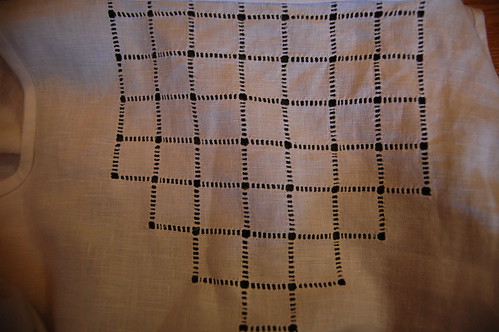 A detail of the neckline. You can see the bias binding at the arms. The hemstitching was done by pulling threads and sewing groups of thread together. 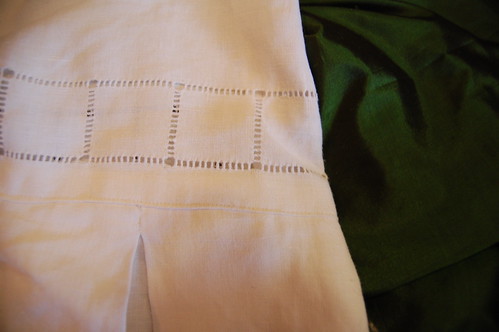 A detail of the waistline. The bottom edge seam allowance was pressed up and the skirt topstitched in. I've seen this done on 20s dresses, and it makes a nice, neat line. The box pleats are sewn together for about half an inch. I tried to sew them a little further down, like the pattern and the Etsy dress, but it was extremely unflattering. 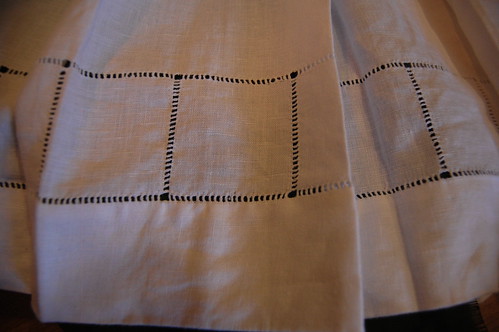 Now, if only I really played tennis...
Posted by Katherine Caron-Greig at 8:43 PM