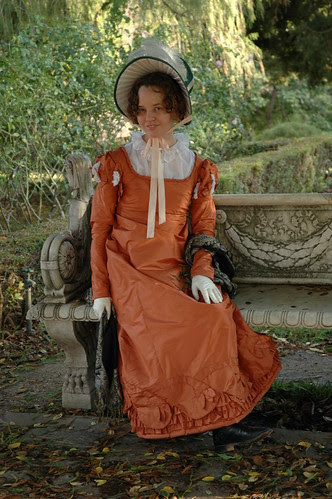 Yes, I called this the dress of doom while making it. Why? Zillions and zillions of little piped bits! Fortunately, I love making piped bits, and doom in this usage is a good thing, but still, it was a lot! And I really want to make a similar pelisse, only with even more trim.

As usual (I'm not really into designing things, am I? I'm nowhere near as creative as people think!), I had an inspiration dress, seen in a flash video here. Needless to say, lots of pausing was done when studying the dress! 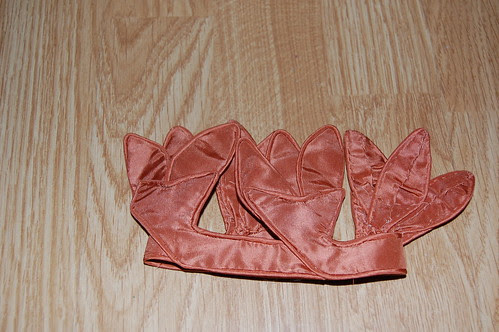 This is a sleeve band--see? Doom! 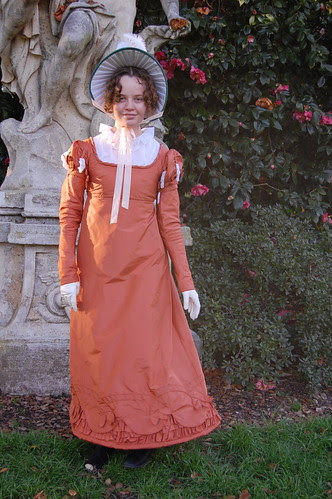 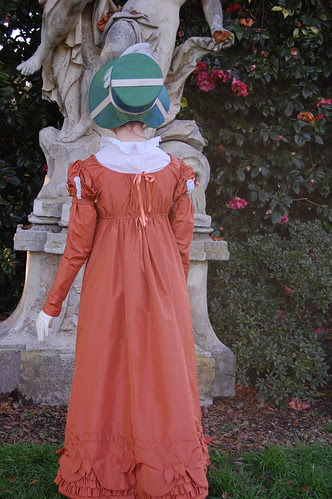 The dress is made from silk taffeta bought from a rather amazing sale fabric.com had at the time. $4 a yard or something like that? Plus their normal coupons and I had some random money in my PayPal account. It was wonderful. The bodice is lined with lightweight linen and the skirt is unlined. I'm wearing it over shift, 1820s stays, and a bodiced petticoat.

The bonnet is the Lynn McMasters Seaside Bonnet. 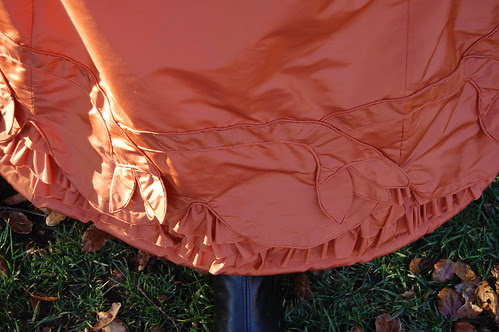 The bottom of the skirt itself is the scalloped part. The millions of little ruffles were sewn separately and tacked in behind the floral trim on the skirt so no stitches show. 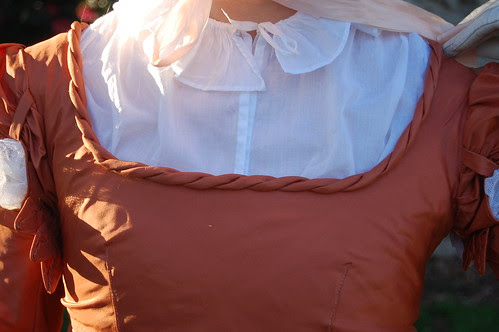 The neckline is trimmed with bias strips of silk taffeta that were wrapped around strips of wool batting. Then I just twisted them together. 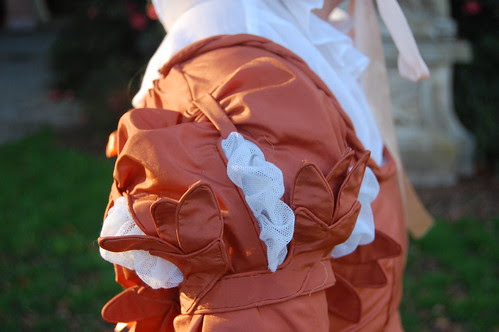 The sleeves started out as a standard puff sleeve. Then I sewed piping on or the cut outs and cut them out and put gathered netting behind it. The area between the top of the cut out and the top of the sleeve was then gathered, and a band put around it. The band doesn't actually gather the sleeve. Then, the previously mentioned sleeve bands of doom were attached. The undersleeves are just slightly shaped tubes with ribbon ties, and there are loops inside the short sleeves to tie them to. 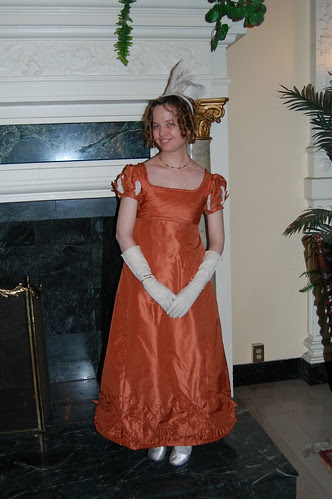 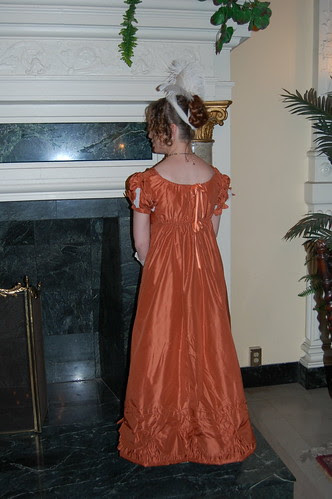 One of the best parts of this dress? Untie the undersleeves and take off the chemisette, and evening version! 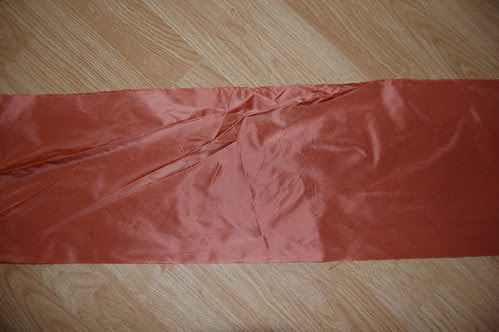 It's hard to see, but the designs are drawn on the silk in this picture.

The trick to making the piped bits fun instead of frustrating is to sew first, cut last. Draw your designs on, sew piping around the design, and then cut. So much less fiddly! Also, there's no need to make the piping before you do it. I think it would probably be harder if you did, actually, since there might be less flexibility. Just fold your bias in half, place the cord in the middle, secure it, and start your design. You do have to continue folding it as you go, but after an inch or so, it really does settle into place. 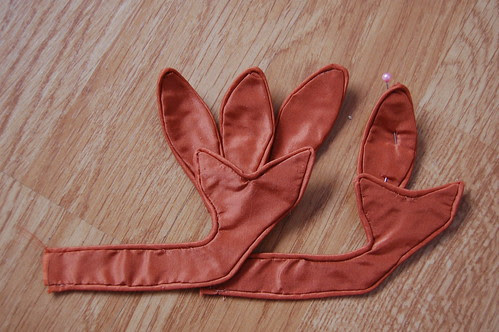 The sleeve band in progress. Once each piece is cut out, flip the seam allowances to the inside and baste them into place if the element is going to be free standing like the top of the sleeve band, or, like I did for the skirt, just make sure they stay in place. No need to do extra work! 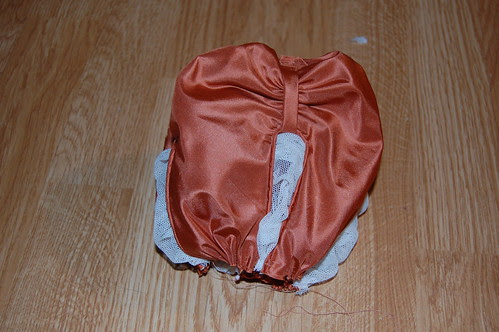 And here's the sleeve without the band. Much simpler looking! 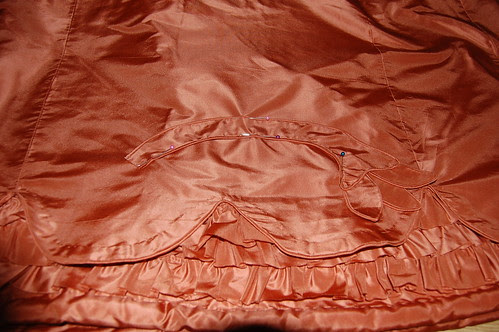 And here's sewing trim onto the skirt. As I sewed the trim on, I caught the inner ruffle. The hem is padded with wool batting. 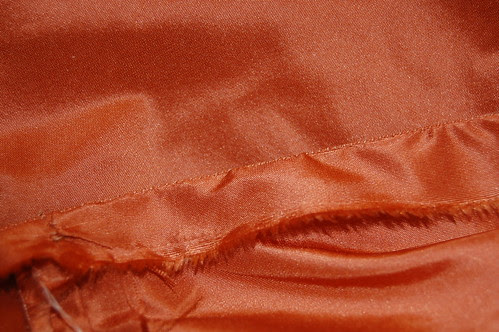 The bottom edge of the bodice was hemmed, and the top edge of the skirt was folded down. They were then whipstitched together. 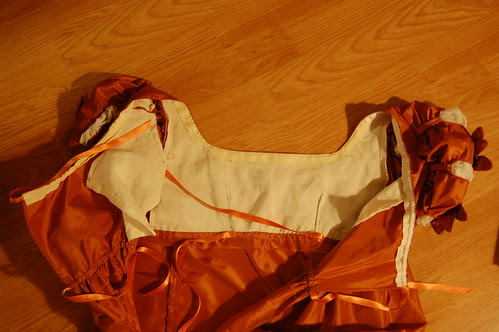 The dress closes with drawstrings and has a ribbon attached to the front of the bodice to help keep it in place. The back lining doesn't have any closures, it just sits in place. I suppose you could have someone pin it for you, but that's not really necessary. I saw this on an original, but several years later, I couldn't begin to tell you where!

LJ tag for the dress!
Posted by Katherine Caron-Greig at 2:59 PM