The Story of a Parasol 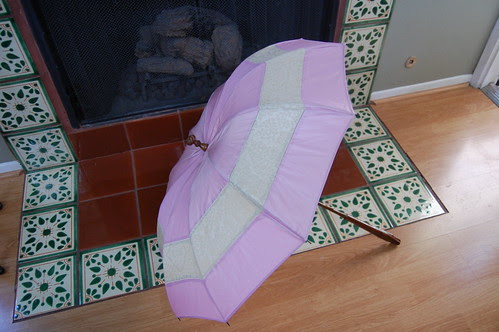 Yesterday, I had full intentions of writing a tutorial for making a parasol cover. I was armed with my camera, silk, and an empty frame. 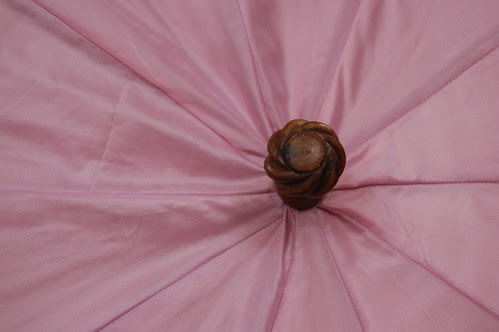 Alas, the tutorial was not to be. Somehow, a parasol I'm very happy with (despite the cover being a tiny bit loose, I'll admit!) after quite possibly the oddest sewing experience ever.

Let me start by saying that the first parasol I made (seen here) went together easily I thought that this one would too. Not so much! 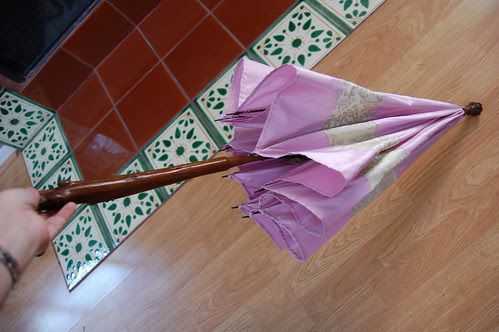 To figure out the pattern for my first parasol, I cut a circle, put a hole in the center, pinned it to the ribs, pinned the center of the fabric between the ribs to get the shape, traced that as a pattern, and voila, parasol cover pattern. This time, that resulted in first a cover that would only let the parasol open half way up, and then a parasol that tilted up like a bowl when I decided to try a circle plus seam allowances. Fortunately, pinning in a tiny bit on the edges from that worked. Somehow!

The frame does have an odd shape. It dips in at the middle and then comes out. I think this makes it very difficult for a very amateur parasol coverer to deal with! After that, I had a pattern but not enough of my hemstitched fabric. I could only cut four panels from each side, for a total of eight. I needed ten. But easy--I could piece two halves I'd have leftover, and it would work, right? Um, no, only after cutting did I realize that two halves make one whole, not two. Oops. Fortunately, I had all my fabric with me and with leftover pink was able to do two more panels with hemstiching. With paper towels this time, which I preferred to the tissue! 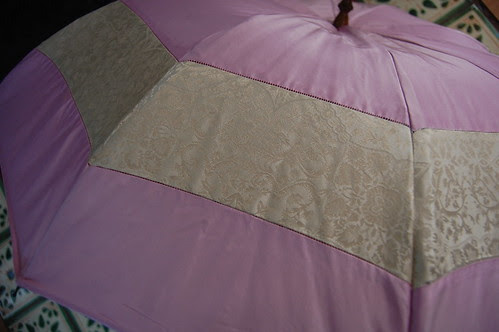 Meanwhile, Twila's parasol was being even more argumentative than mine. It will be beautiful when done though! We decided grain issues were mainly at fault.

I sewed the cover though, and safety pinned it on, and after a very tense would it work moment, it worked. Huge relief! 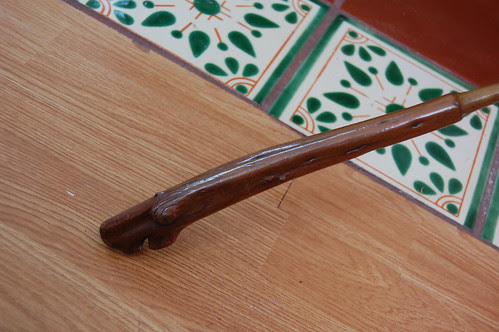 I ended up sewing the cover on twice, as the first time there were two problems. One, I didn't pull the top in far enough. Two, the bottom had to be sewn right next to the hem or the hem would flip up. Though I'm calling it completed, it still has a little left. I need to tack the ribs to the seam allowances just above the joint for four or five more ribs, and then I want to do it lower in the cream part since that fabric frays easily and I want the ribs to sit there better. For all practical purposes though, it's done! And I left it open all night last night to make sure it was in working order. I woke up to a still opened parasol that didn't have anything weird happen to it, so all was good :) 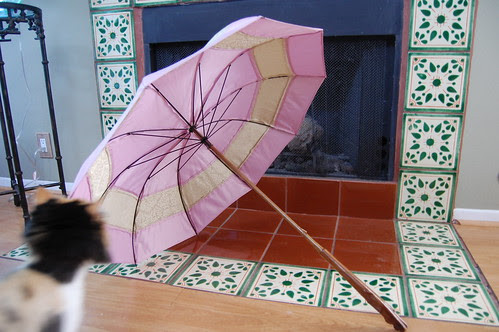 Posted by Katherine Caron-Greig at 2:14 PM