I've been a simply horrible Blogger! My Live Journal is nice and active with lots of day to day sewing, but here? Well, I've more than neglected it. So I decided it was finally time to present my dress and a half--a day and evening version of a Regency dress built around the same base. 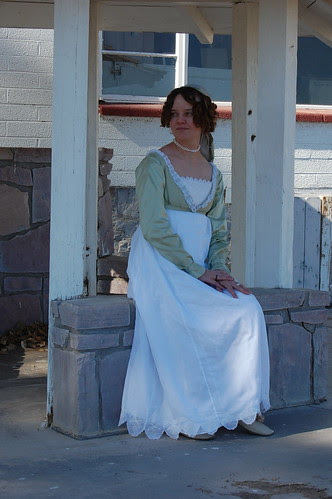 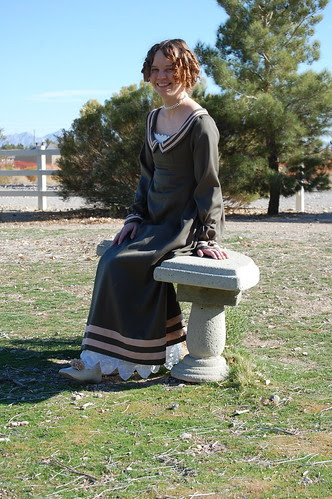 For this year’s Jane Austen Evening in Pasadena, I decided to make a new dress and a half. Why a dress and a half? A day dress and evening dress based off the same base! I fell in love with a fashion plate that showed an embroidered muslin skirt worn under a dress Of course, I didn’t want to put all the work into an embroidered petticoat and only wear it during the day, so I found an evening spencer that I could also wear with the petticoat. 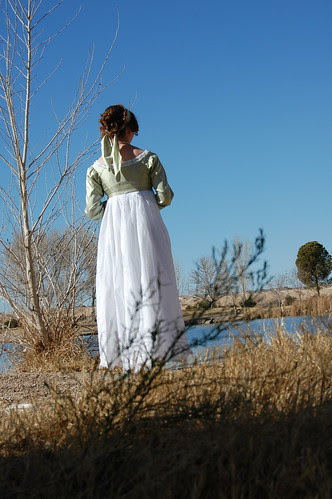 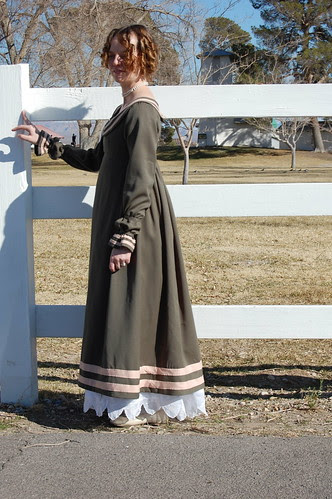 Now, I would also need something to wear underneath both dresses. I just love the little embroidered insert in the day dress, and the open spencer would obviously need something prettier than my plain petticoat underneath it. By pure chance,I had already found an intriguing bodice at the Met.It was sleeveless, tied in back, and was embroidered. A perfect solution to my dilemma! 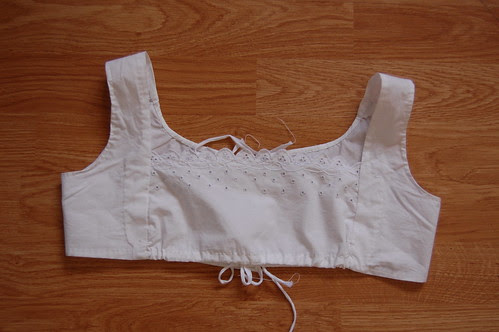 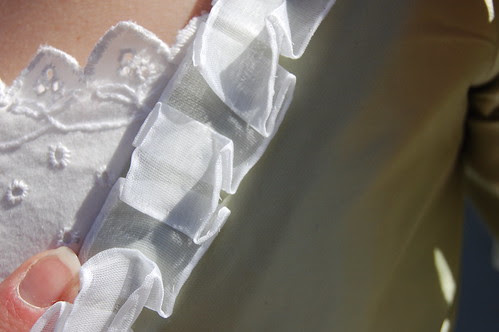 The little bodice and a detail with the it took forever hand hemmed trim :)

Another decision that troubled me more than it should have was how to make the top of the petticoat. I had made both strapped and bodiced petticoats in the past. How should I attach this one? I was already planning on wearing it over my bodiced petticoat and combined with the decorative bodice (and the shift and the stays…) it seemed like it might be too many layers. I thought about attaching the petticoat to the decorative bodice, but what little proof there is of bodiced petticoats doesn’t include any that have embroidered bodices—at least that I’ve come across. So, straps it was. This ended up being ideal as I had a slight problem—I needed to wear the petticoat lower with the day dress than with the evening dress. For it to show beneath the day dress, it wasn’t high waisted enough to wear with the spencer! After being slightly depressed over this, I realized that I could easily convert the length of the petticoat with straps and pins. Pinning is period! And problem solved. 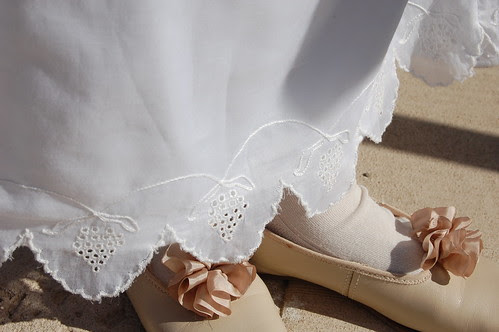 The day dress is made of wool, trimmed with wool bias strips, and lined with linen. The spencer is made of silk satin, trimmed with Swiss cotton organdy, and lined with cotton. The petticoat is made of sheer muslin and embroidered in pearl cotton with tambour and buttonhole stitches and eyelets. The decorative underbodice is made of Egyptian cotton, and embroidered with the same stitches in Danish flower thread. Amazingly, except for the ¼ cotton tape to close the underbodice, pearl cotton, and heirloom thread I used to hem the organdy, everything was in my stash. That was very nice! 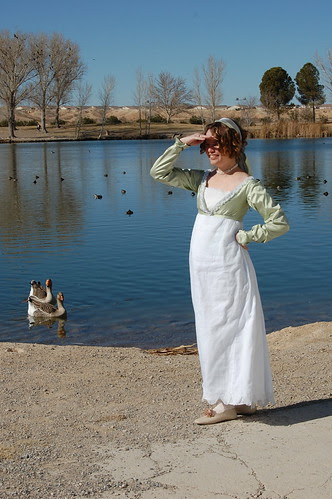 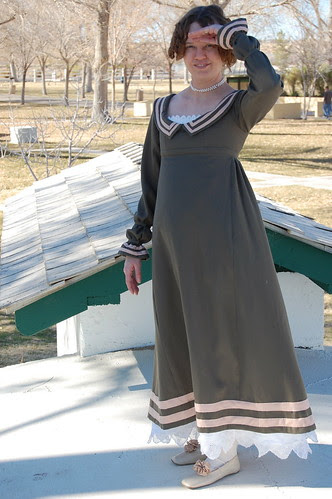 I have full arm movement in these. Much nicer for dances than a mid nineteenth century ball gown :)

Both bodices are made from my Regency base pattern, which is based off the 1820s bodice in The Cut of Women’s Clothes by Norah Waugh. The dress skirt is the 1820 skirt from Period Costume for Stage and Screen and the petticoat skirt is the 1815 skirt from the same book. I chose the later skirt for the dress because I wanted it to flare out like it did in the fashion plate, and this skirt did just that. 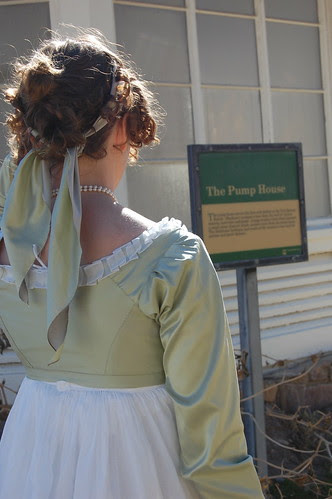 As far as construction goes, the day bodice is flat lined and finished with self bias, based on an original c. 1820 bodice that I own. The spencer is made with 18th century techniques. The seam allowances on the satin were folded over and sewn together with one layer of the lining with a spaced backstitch and the remainder of the lining was whipsitched in. The edges were finished with point a rabbatre sous le main. 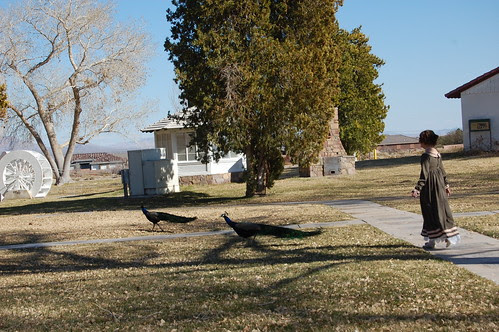 Both the dress and petticoat skirts were cartridge pleated and attached to waistbands with whipstitches.

Everything on the dresses is sewn by hand.

I’m wearing it over a batiste shift made from the Kannik’s Korner pattern, long stays that are based off a pair in the Met, which I altered the pattern I took from my 1820s stays for, and a bodiced petticoat made from the same base pattern as I used for these dresses. 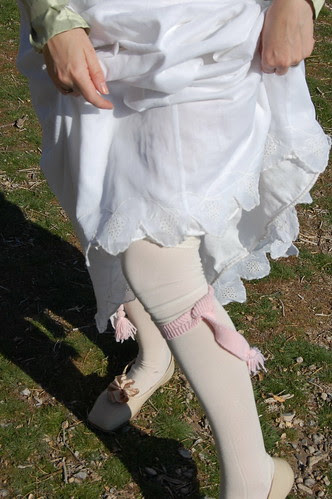 And my new hand knit garters! Since both my old pair were eaten...

If this sounds familiar, it's the full text of what I edited down for my Your Wardrobe Unlock'd 2011 Double Period Project Entry. I realized that I had written much too much!

And more pictures are in the Flickr sets. Because obviously I like seeing pictures of me on the internet...

The spencer
The wool dress
Posted by Katherine Caron-Greig at 4:33 PM