Tintype Photography, Or A Photographic Trip to the Past 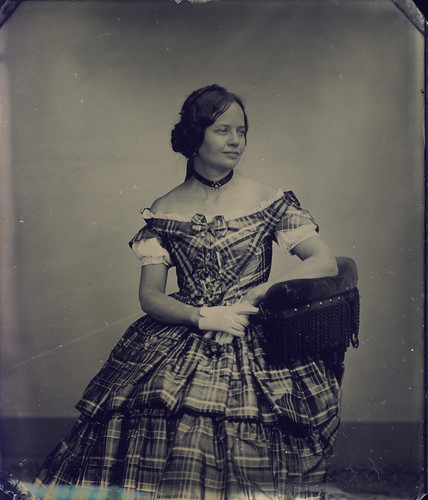 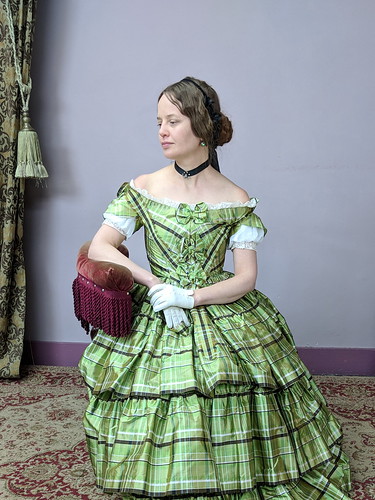 A group of friends and I went to Gettysburg for Remembrance Day, where we spent most of our time at the fabulous Victorian Photography Studio. We also visited in 2015, but the new owner encourages social media and digital photography, which made the experience even more interesting as it was possible to take detailed comparison pictures in the same environment.

The above pictures were taken at nighttime, between dinner and the second half of the ball (yes, a few of us missed half the ball to have a few more tintypes made!). In period, photographers were dependent on daylight, but thankfully the studio has an excellent daylight mimicking light setup. All of the color pictures were taken with our cell phones and haven't been touched up, just cropped to help the comparisons a bit.

The ball gown I'm wearing is one of my older dresses. I made the skirt in 2007 and the bodice in 2010. I think the color shift in the wet plate was the most interesting of my dresses. The green in my skirt has quite a bit of yellow in it--it's shot with one of the threads a goldish color--and it darkened noticeably. 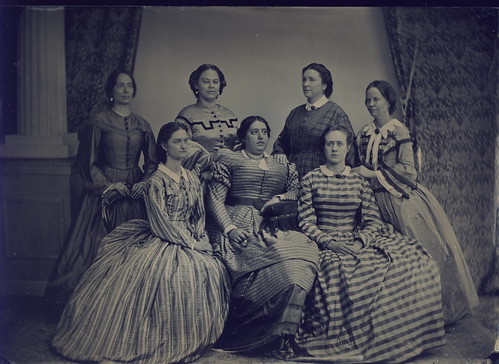 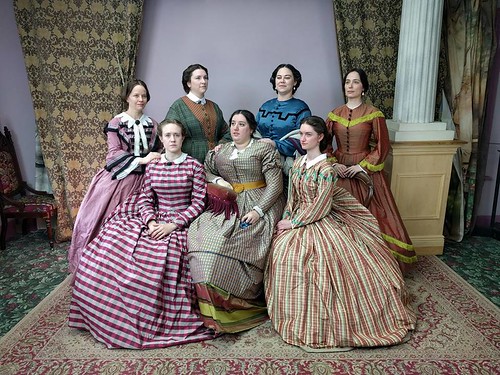 I love that we had such a variety of fabrics and patterns in our group shots. Some of our dresses shifted in expected ways--however, Leia's dress has a striking contrast of rust and chartreuse in real life, but faded into one color. Taylor's blue dress lightened considerably and the contrast with the black trim is even more pronounced than in reality. Adrienne's dress has lost definition in the check and appears more like a stripe.

My dress, Robin's wrapper, Alice's dress, and Amanda's dresses look more like what you'd expect in black and white photography with the contrast in colors remaining consistent with reality. 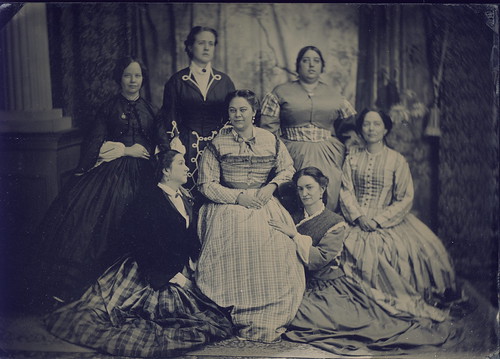 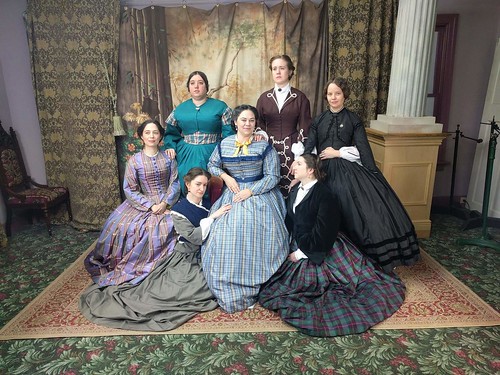 In our second group shot, I think the most striking change is the lightening of blues--and Leia's plaid looking like a stripe. 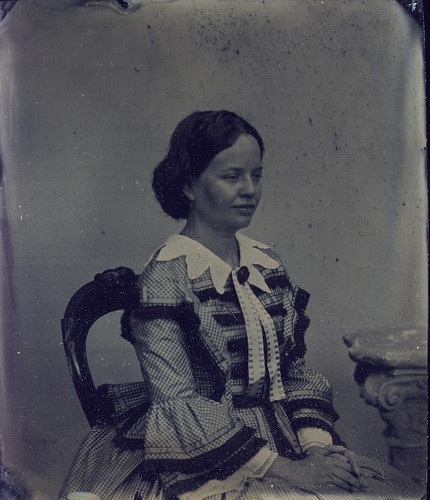 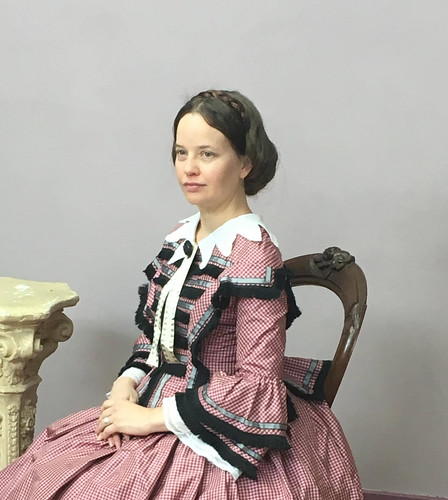 For this dress, I copied a period photograph and tried to get the details as close as possible to the original. Though it's impossible to know, I'm glad that the colors I chose had similar contrast to the original. The ribbon on my dress is strips of white and black shot taffeta with fringed edges, which reads as grey. The center is a bit darker than the original, though the darkness of the soft edges is similar. The eyelets in my collar stand out a little more in the tintype. Please note, I took my rings off in between the pictures--they didn't disappear! 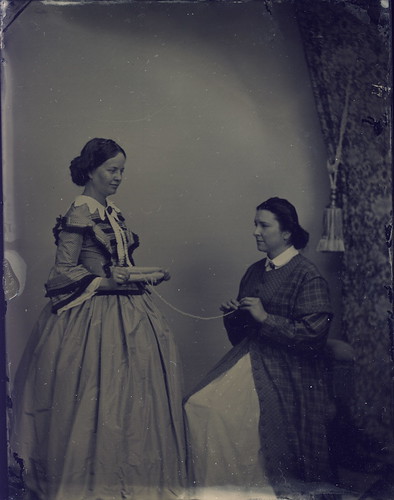 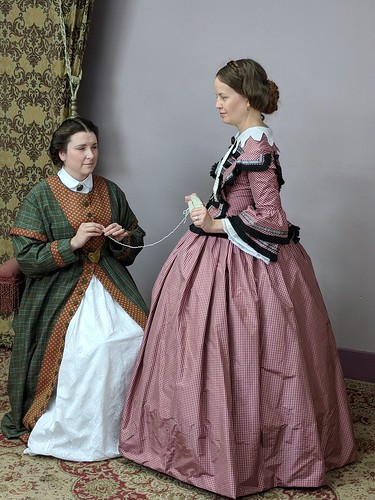 This pose is inspired by an original photograph. Though portraits are the most common, many photographs also showed people doing activities--or at least pretending to! 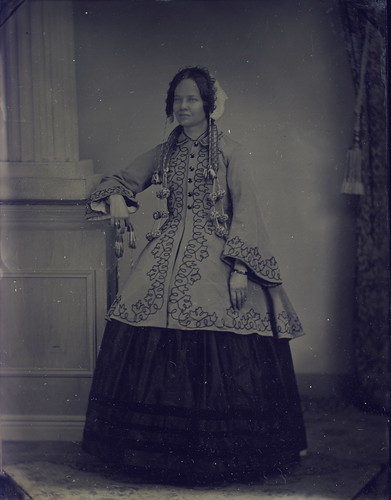 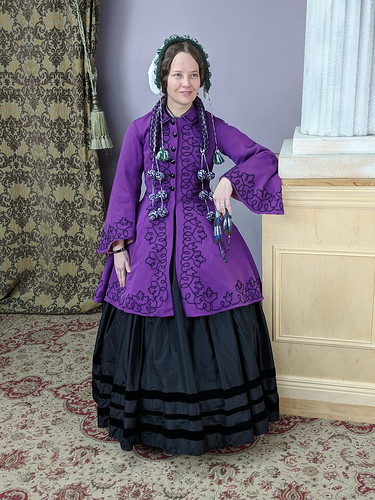 Even though I brought my paletot, I didn't expect to take a tintype with it. Saturday though, it was pouring rain, so wearing it with my silk dress was a necessity. I couldn't resist finding out what the soutache trim would look like, and I wasn't disappointed. Though the purple and black contrast well, it's even more defined in the tintype. 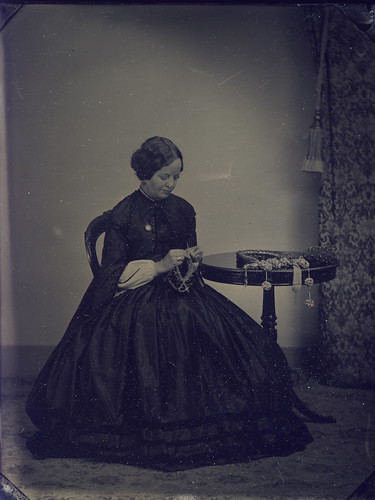 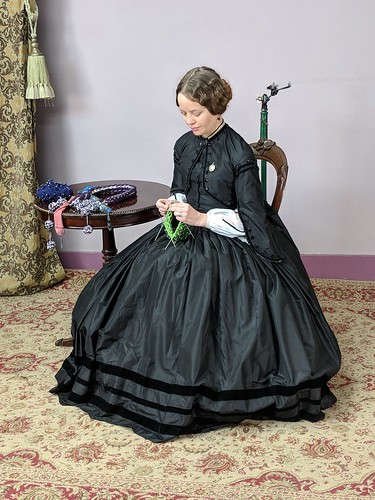 Many photographs featured knitting, and since I not just love period knitting, but have a knitted bag in progress, I decided that I needed to recreate such a scene. This photograph was my main inspiration, though I decided to pose with more knitting instead of a book. I've included two miser's purses, princess royal scarf, Robin's pineapple, and Adrienne's pence jug.

The white brooch on my chest isn't actually white--it's a miniature of President Obama that I made for a reenactment just before the 2008 election. It has a glass covering, which reflected the light so you couldn't see the picture--his official senate picture. I do wish it had shown up! 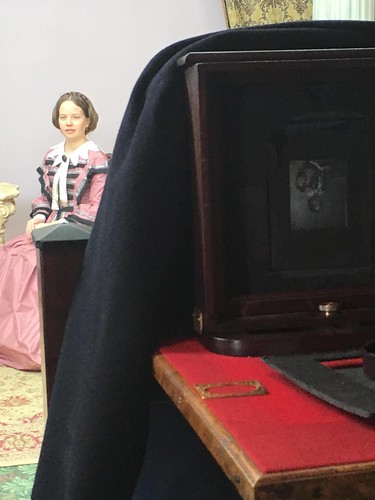 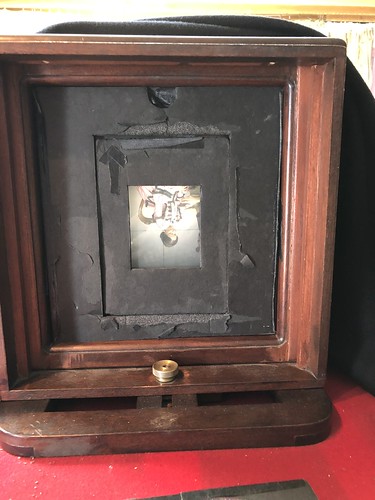 Looking through the camera was fascinating! In addition to the photograph being flipped, the image is upside down. 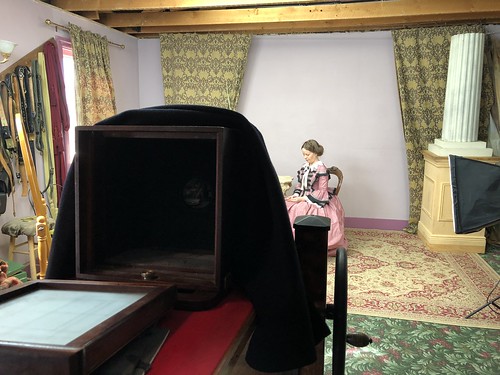 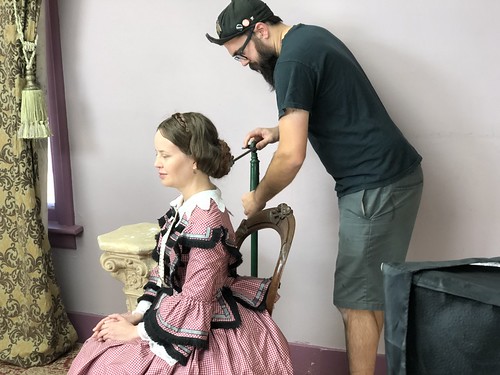 The camera is positioned a good distance away. All of our pictures with our phones were taken much closer, yet had similar or wider angles. The exposure time was 15 seconds, half of the 30 seconds of our previous session in 2015. Though this wasn't a very long time to sit, having the head clamp was very useful. Breathing and blinking are fine during the process. 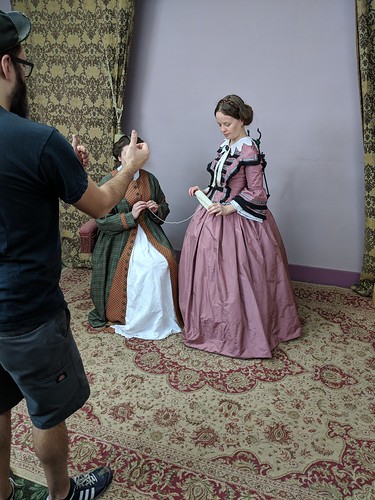 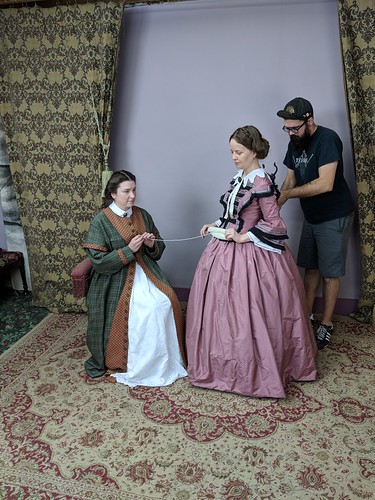 Setting up the yarn winding shot--getting in good distance of the camera, and head support hidden behind me. 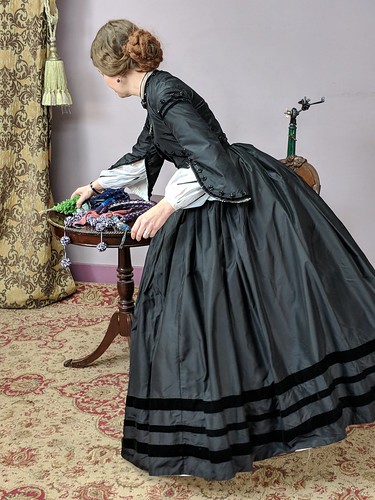 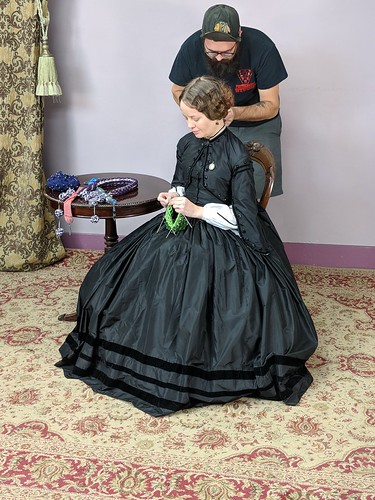 Setting up the table of knitting--trying to make everything look as natural and distinct as possible. I left off the talma wrap and mariposa hood that I also brought on the trip. And once again, having the head clamp positioned. It's really quite comfortable--your neck just rests on it. 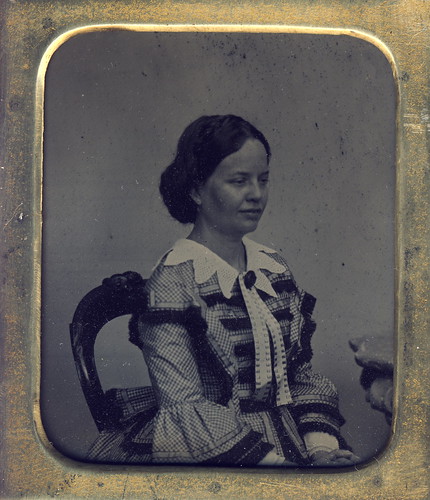 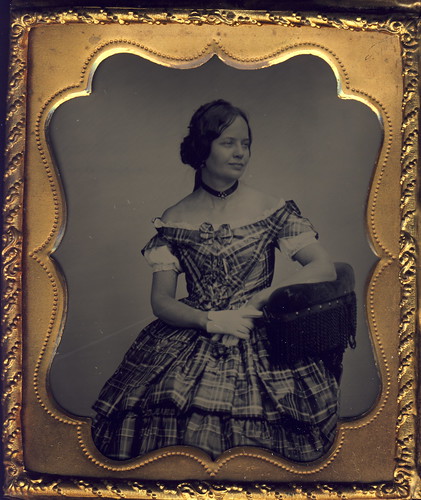 Two of the tintypes in cases--I think they really add to the authentic look!
If you ever have the chance to have a tintype made, do it! It's really an amazing experience and helps to imagine what people in the past experienced. The picture emerging is fascinating to us--just think what it would've been like 150 years ago! And I couldn't recommend the Victorian Photography Studio more. They were professional, friendly, took beautiful photographs, and even had delicious cinnamon rolls. What more could you ask for!


And speaking of the photographs emerging, below are videos of the developing process. They start as negatives, and then all is revealed!

Posted by Katherine Caron-Greig at 8:24 PM