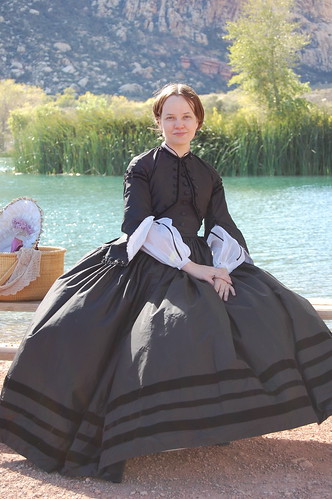 Possibly my favorite dress I've made is my day and evening black silk 1860s dress. While it's basically a fashionable black dress, I was inspired by the idea of sympathetic mourning--in this case, for Prince Albert. Black ball gowns were fashionable for a time as a result of his death. My dress, however, doesn't follow the standard conventions of mid century mourning--it's silk taffeta, not a dull silk, and quite sparkly with glass jet beads. 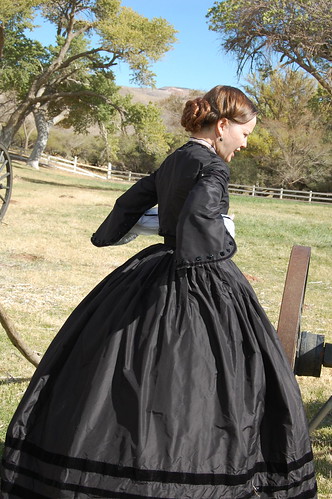 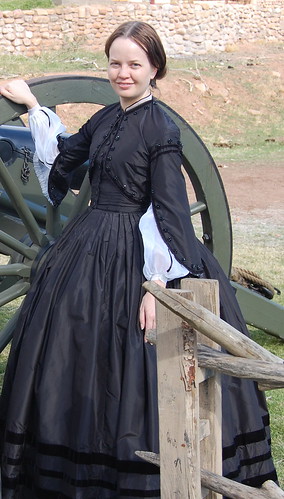 The day version of the dress is heavily inspired by this dress in the Danish national costume museum. Instead of a separate waistcoat though, I made a sleeveless bodice that was attached to the skirt. I've worn the jacket two ways--hooked shut, and fastened just at the neckline.

The dress is made of silk taffeta and trimmed with the softest velvet ribbon I could find and glass beads. the undersleeves are cotton organdy trimmed with black silk ribbon and basted into the armscyes of the jacket. The jacket sleeves are lined in white China silk and trimmed with white box pleated pinked silk. 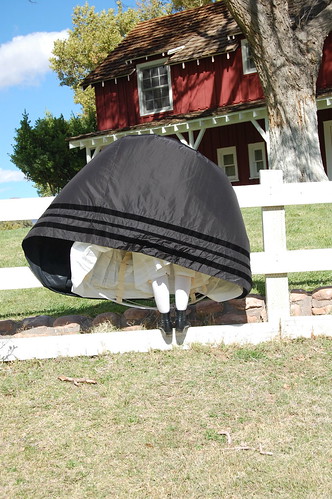 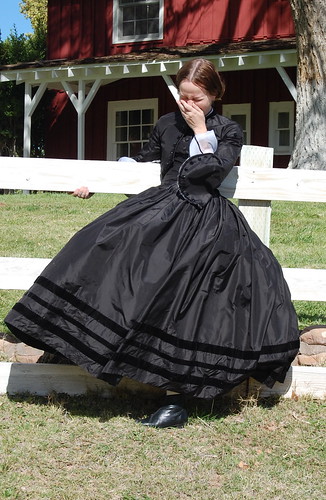 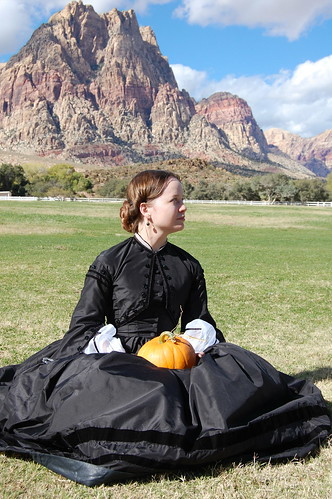 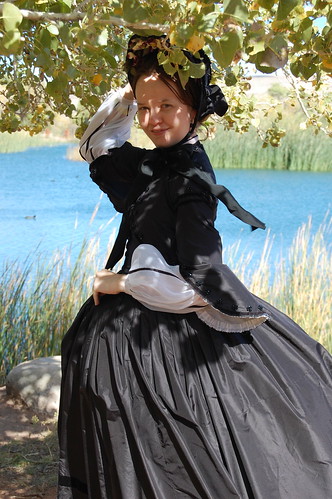 As for more typical accessories, my bonnet is the Miller's Millinery spoon bonnet. Sadly, it has since been crushed, I think beyond repair. It was damaged travelling and I managed to revive it, but as it's currently inside out, I rather despair about its chances. 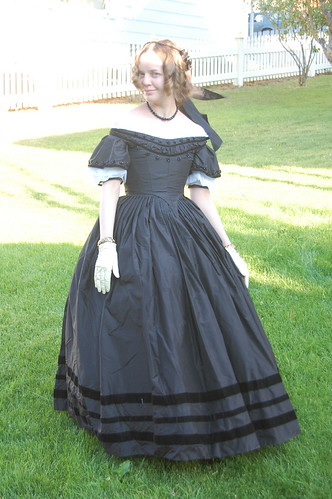 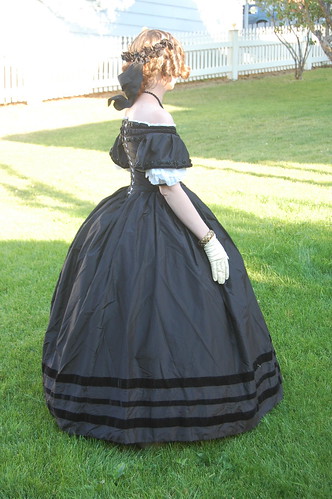 Though I've written about the ball gown before, I thought I may as well share again! I've been lucky enough to wear this several times--at a Social Daunce Irregulars ball, Costume Con, a dance at a reenactment, and a ball in Virginia City, Montana. 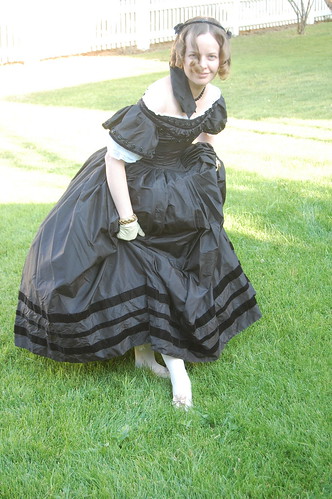 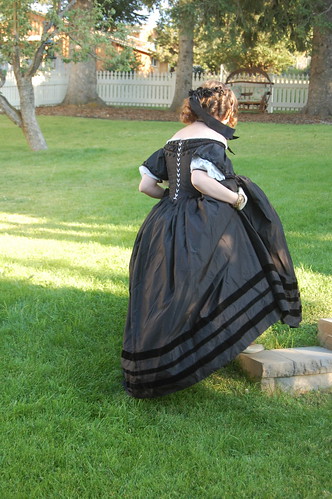 And the dress in motion. It should have black lacing, but it somehow got separated from the dress and no place in Virginia City sold ribbon. Fortunately I had a spare chemise with me that had ribbon in the neckline lace!

A little more below, including the dress worn without the jacket, the jacket hooked shut, and ballgown undersleeve construction. 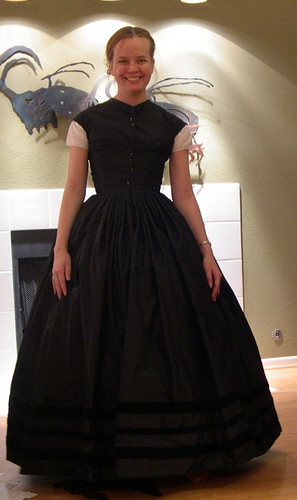 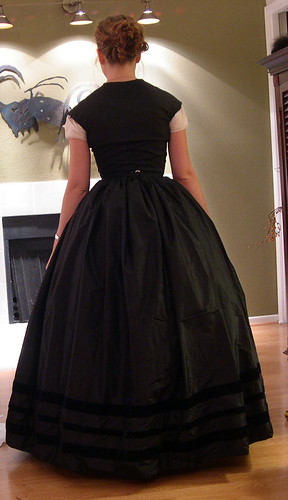 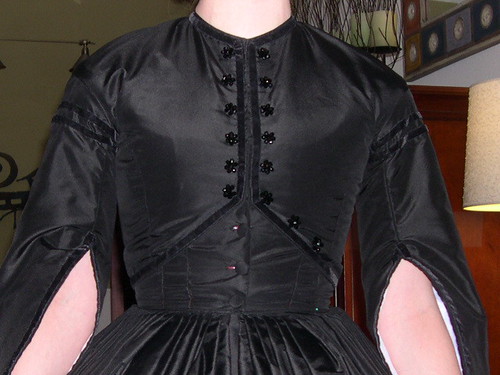 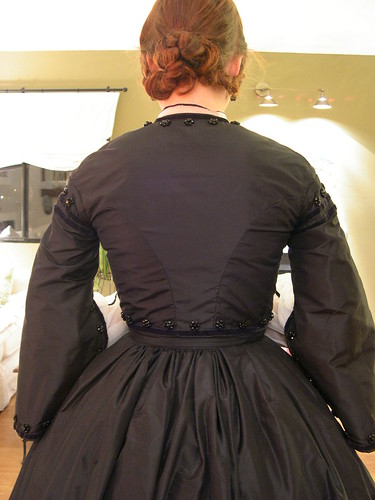 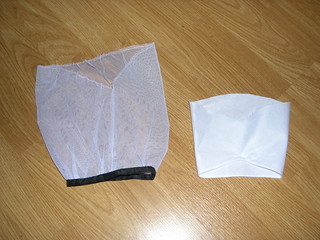 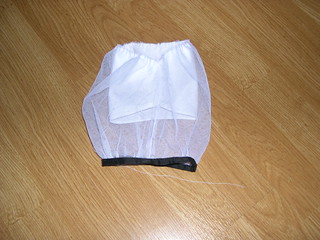 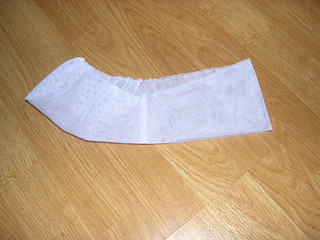 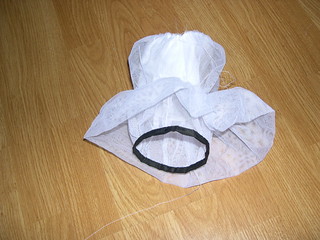 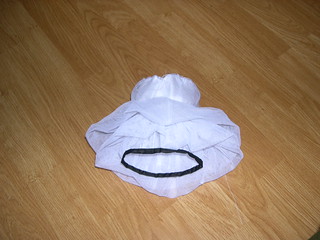 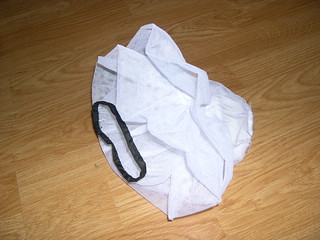 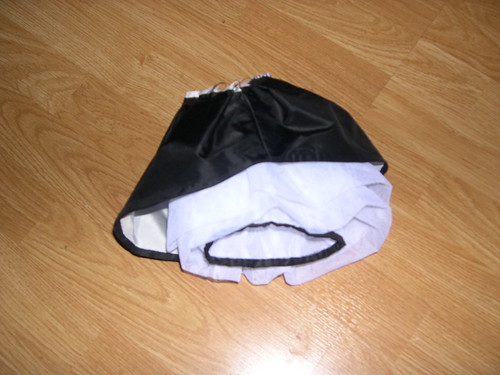 Posted by Katherine Caron-Greig at 5:02 PM